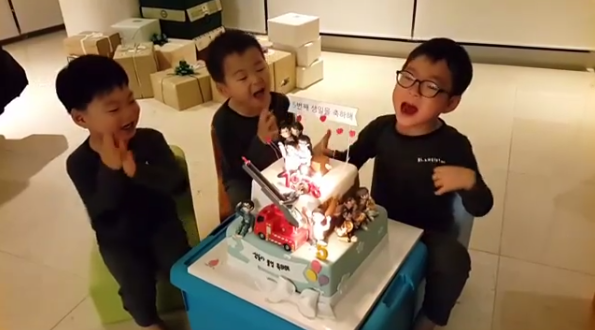 Daehan, Minguk, and Manse are celebrating their birthday a couple days early with their dad Song Il Gook!

On the morning of March 14, Song Il Gook shared a video of his beloved triplets to his Instagram. In the video, the boys sing “Happy Birthday” to themselves, with Daehan particularly into the song and Manse looking like he’s mostly excited about their giant cake! The cake appears to feature figures of the triplets and their dad, as well as some of their favorite things, such as a fire truck. There’s also a big pile of what looks like presents in the background!

When they finish up the song, the trio excitedly blows out the candles. Manse then points at the figures and turns to his dad behind the camera to ask, “What’s this?”

Song Il Gook writes as the caption to the video, “Since I can’t be with the children on the day of their birthday because I’ll be away in the countryside filming (T.T), we had an early birthday party~^^.”

Daehan, Minguk, and Manse came into the world together on March 16, 2012, which makes them 4 years old this year in Western reckoning.