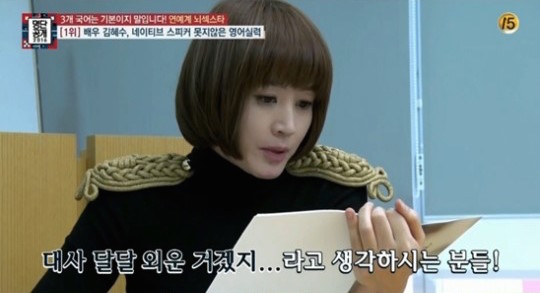 On March 14, tvN‘s “The List 2016” revealed the top celebrity “brains” who can speak at least three languages.

Kim Hye Soo takes the number one spot, with her ability to speak five languages. She is able to speak rather fluent English, and can easily answer in foreign interviews. Her fluency allowed her to deliver her lines in the movie, “The Thieves,” with ease.

The reason Kim Hye Soo learned English was to perform her role in the movie “Too Tired to Die,” starring Kaneshiro Takeshi, at a higher level. She studied night and day in order to be able to understand and portray her lines, which were all in English.

She can also speak Spanish, Japanese, and Chinese. Back in 2007, at the Hong Kong International Film Festival, she was seen having smooth conversations with Michelle Yeoh, and Andy Lau.

The List 2016
Kim Hye Soo
How does this article make you feel?