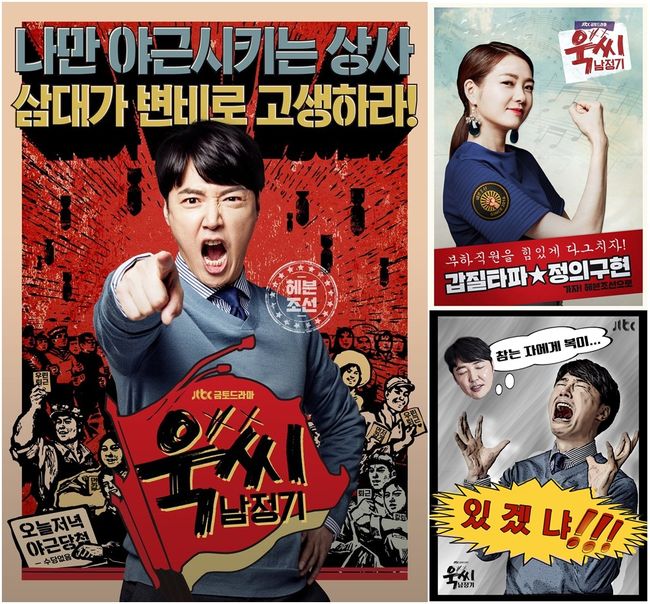 On March 16, JTBC‘s new weekend drama, “Ms. Temper & Nam Jung Gi,” released retro-style posters that are centered around the concept of gathering forces for fighting against abuse of power. They show a contrast between the subordinate-minded Nam Jung Gi, played by Yoon Sang Hyun, and the “tough unni” Ok Da Jung, who is played by Lee Yo Won.

In one of the posters, Yoon Sang Hyun says, “The fortune of one who endures will…contrary to what I thought, Not exist!,” while bemoaning his circumstance. In yet another poster, he shows a confident, warning pose, as opposed to his timid nature, while stating, “The boss who only makes me have overtime. May your future generations suffer with constipation.”

Different to the other posters, Lee Yo Won clenches her fist, with the slogans, “Demolish Abuse of Power. Realization of Justice.” However, both of these are under the fine print, “Let’s push subordinates with strength.”

Written by Joo Hyun, and directed by Lee Hyung Min, “Ms. Temper and Nam Jung Gi” portrays the how the timid Nam Jung Gi changes the hot-tempered Ok Da Jung, and her sense of superiority, by giving her a taste of her own medicine. Viewers are anticipating the synergy between the two completely different characters. It will air its first episode on March 18, at 8:30 p.m. KST.