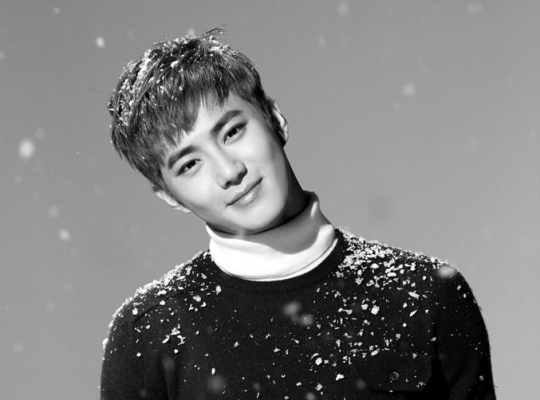 On March 21, EXO‘s Suho, one of the main actors of the upcoming movie “Glory Day,” sat down for an interview with Korean news outlet TV Report.

Suho will be making his official on-screen acting debut through “Glory Day.” In this production, he successfully strips away all the extravagance he portrays on stage to play the role of Sang Woo, who is the dilemma of his friends.

He tells a story about how he felt when he was admitted as an acting major to Korea National University of Arts when he was still an SM Entertainment trainee. He explains, “When I was in my last year of high school, I hurt my leg while preparing to debut. I think I was quite depressed that I couldn’t dance, and my acting was static. At the time, receiving my acceptance letter to that university was like a ray of light sent from the heavens.”

Suho also talks about how he lived his life energetically when he was twenty, and was almost just as busy as he is now with EXO schedules. He explains, “I would go to school, even on the weekends, and every night I would go to the agency (SM) to practice. Because of those tiring moments, I found faith in myself, realizing I can endure anything because I’ve overcome this.”

However, due to his impending debut in EXO, Suho had to unfortunately make the choice to drop out. When asked about how he felt back then, as well as what acting means to him, he pauses, carefully choosing his words.

Suho says, “Acting is important. To me, it is both a desire and a way to relieve my emotions. I can do things I can’t do, or haven’t been able to do in real life, through acting. Also, I am able to indirectly convey my emotions to the audience when I act,” expressing his passion for acting.

“Glory Day” is a youth movie that talks about how time stops for four 20-year-old friends who go on their first vacation together, only to remember that day forever with regret. Last year, this film was invited to the Panorama section of the 20th Busan International Film Festival. This production is also the first feature-length film of director Choi Jung Yeol, who’s won awards at the Blue Dragon Film Awards and Daejong Film Awards for his short-film, “Nagging,” which was released in 2008. “Glory Day” will be released in South Korean theaters on March 24.