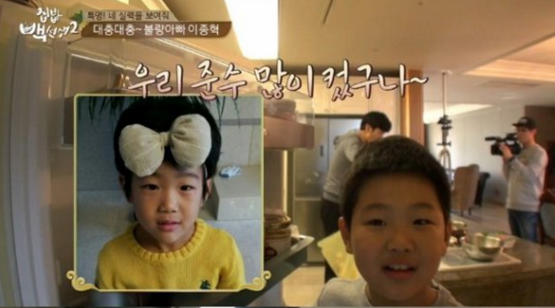 Lee Jong Hyuk Shows How Much His Sons Have Grown Since Leaving “Dad! Where Are We Going”

Actor Lee Jong Hyuk’s sons Taksu and Junsu have grown up a lot since we saw them last on MBC’s “Dad! Where Are We Going.”

On March 22, he made stir-fried chicken for the tvN cooking show “Teacher Baek” and asked his sons to try it out. Junsu came first to his dad while he was cooking. Junsu showed a taller and chubbier side to him since leaving the popular MBC family variety show.

When someone said said, “Junsu has gained some weight,” Lee Jong Hyuk replied, “He really eats a lot” with a proud smile.

His older son Taksu showed off a dependable hyung side as he walked in wearing his school uniform. He drew more attention for his more manly side that he showed in his appearance.

Taksu
Junsu
Lee Jong Hyuk
How does this article make you feel?