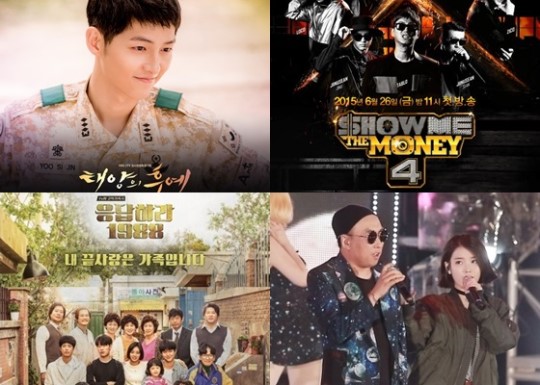 Songs From Television Shows Take Over the Music Charts

The music charts have been taken over by television shows. From songs featured on variety shows to drama soundtracks, they have swept the charts and have proven just how much love their shows have received.

In the case of the KBS drama “Descendants of the Sun,” it isn’t just the show that is a huge hit but the corresponding soundtrack has also become immensely popular.

The current songs from that soundtrack include Yoon Mirae’s “Always,” Chen and Punch’s “Everytime,” Davichi’s “This Love, Gummy’s “You Are My Everything,” Mad Clown and Kim Na Young’s “Once Again” and K.Will’s “Talk Love,” and each have swept the charts upon its release.

Moreover, songs that have featured on variety shows have also received a lot of love. First, from March of last year, the songs from Mnet’s “Unpretty Rapstar” were very popular and were soon followed by songs from “Show Me the Money 4,” including the track “Okey Dokey” from Zico and Song Mino as well as Song Mino’s solo track “Fear.” In the fall, MBC’s cornerstone variety show “Infinite Challenge” released songs from their “Yeongdong Highway Song Festival,” such as the Kwanghee–Taeyang–GD collaboration “Mapsosa,” Park Myung Soo and IU’s “Leon,” and HaHa and Zion. T’s “Sponsor,” all of which stayed on the music charts for many weeks. Upon featuring on the show, the band Hyukoh became popular and their songs topped the charts as well.

Following that, the songs from the hit tvN drama “Reply 1988” took their turn on the charts. Their soundtrack brought back the nostalgic feelings from the past and tracks such as “Girl” by Oh Hyuk and Lee Juk’s “Don’t Worry, Dear” became mainstays on the charts as well.

The ability for soundtracks to do well on the music charts shows that there is a change coming to music. The reason why these songs were able to receive so much love is because there was that much work put into the musicality of the songs. It also reveals the importance of a synergy effect between music and television.

Reply 1988
Unpretty Rapstar
Show Me the Money 4
Descendants of the Sun
Infinite Challenge
How does this article make you feel?