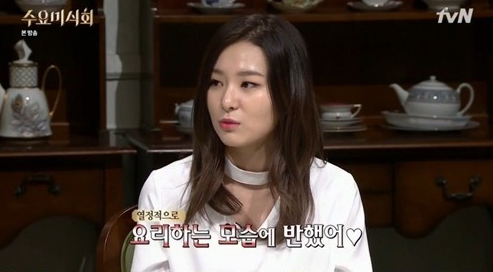 Red Velvet member Seulgi was in for a surprise when she revealed who her ideal guy was!

On this episode, Seulgi drew attention for her love of food, as well as the surprising reveal about about her ideal guy. When asked about why she had previously picked actor Jo Jung Suk as her ideal guy on other broadcasts, she shared that she fell for him when she saw a scene of him cooking on the tvN drama “Oh my Ghost,” adding, “He was so handsome when he was cooking.”

However, she was surprised when the MCs of the show revealed that in reality, it had been Choi Hyun Seok who stood in as the model for that filming, saying that she had no idea it was actually him who shot that scene. The MCs then teased her, saying, “Then, actually, shouldn’t your ideal guy be chef Choi Hyun Seok?” The distinction between her tepid response and Choi Hyun Seok’s satisfied expression drew laughter from the viewers.