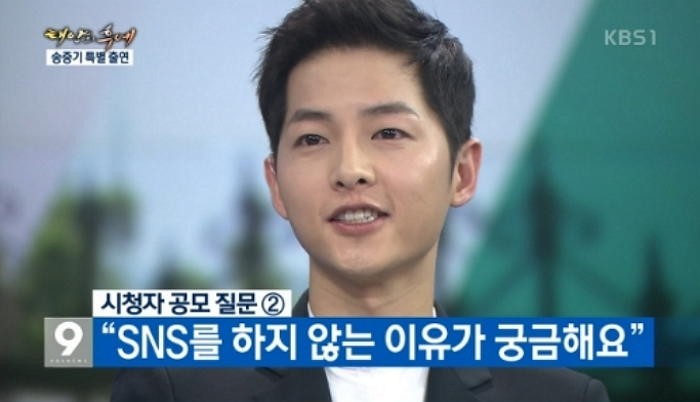 Song Joong Ki Explains Why He Doesn’t Use Social Media

“Descendants of the Sun” star Song Joong Ki says there is one simple reason for his complete lack of social media presence.

On March 30, the actor became the first celebrity to sit down for an interview with KBS1TV‘s flagship newscast “News9.”

During the interview, one of the questions sent in by viewers is related to use of social media. Many Korean stars are active on popular platforms like Instagram and Twitter, but Song Joong Ki doesn’t use any of them. Why?

“There are many different opinions on that. Even people close to me have their own ideas. But, the reason is simple,” Song Joong Ki reveals. “I’m not tech-savvy at all.”

“I don’t use [social media] because I’m not good at it. I don’t know how to use it,” he laughs, explaining how it’s challenging for him to keep up with the latest technology, including social media.

During the interview, Song Joong Ki also jokes about dating rumors with co-star Song Hye Kyo and describes the rare interview as a “dream come true.”

If you have yet to find out what the Song Joong Ki syndrome is all about, watch the first episode of “Descendants of the Sun” below!