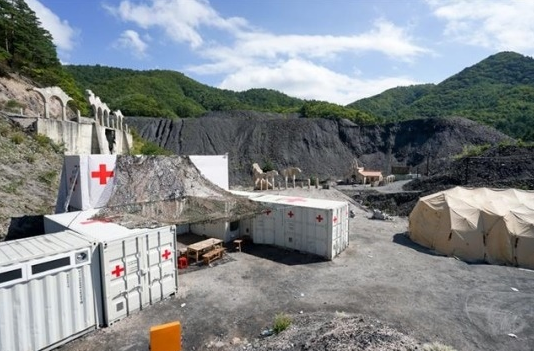 Representatives from the wildly popular KBS drama “Descendants of the Sun” have shared some new secrets about the filming for the drama.

Prior to the show’s premiere, reports had said that much of the filming of the fictional country of Uruk that acts as the primary location for the drama had been done overseas. However, it was revealed it had actually been done domestically in an old coal mine found the city of Taebaek in Gangwon Province, which is approximately 3 hours east of Seoul.

There are three reasons that the writers of the show chose to film the drama at this coal mine that had been abandoned since 2008. The first reason is because it had an expansive area. They needed a large area that could fit all different buildings for the Alpha Team, such as the barracks, hospital, and the building for the medical service team. The coal mine was perfect for all of those buildings.

The second reason was for its geographical proximity to the Samtan Art Mine, another filming location, which is located close by in the city of Jeongseon. The Samtan Art Mine is the first cultural art museum in Korea and being close to Taebaek meant that the producers could cut costs and time for transportation between sets. Moreover, its similar external characteristics with the abandoned coal mine also helped with minimizing any sense of difference between the sets.

The third reason was so because of its far location, filming was unlikely to be revealed or exposed prematurely. Being a drama that was fully produced before airing, it was incredibly important that no scenes were leaked prior to its premiere. The coal mine is located on a mountainside and because the area Eastern District Forest Service is also located there, it could minimize any premature exposure to other cameras before its premiere.

Speaking about the filming plans, writers said, “Being that it was 100% pre-produced, we carefully and thoroughly planned out any filming domestically and internationally. We worked hard to minimize any differences that the viewers might notice between locations in Greece and in Taebaek.”

In order to better tell the story of the soldiers, they received the help from the army headquarters as well as the army special forces. Writers and actors went to visit a special forces army base and received hands-on advice about how to act and behave. In particular, actor Jin Goo received help for his scenes of target practice in the drama from members of the special forces who visited the set directly to offer their assistance in order to make sure that all of the details were accurate.

Moreover, they received help from the army headquarters about the large scale military transport vehicles and helicopters that appear in the drama. The writers revealed, “While we can mimic the exterior appearance of transport vehicles and helicopters, its hard to do the same for the actual equipment that is used inside.” They also expressed their gratitude to the government by saying, “Without the help of the armed forces, it would have been much more time-consuming and costly to film the drama.”

Watch the first episode of the drama exclusively on Viki below!