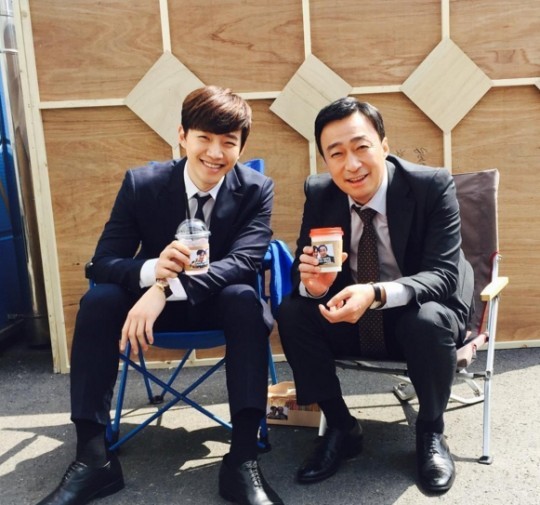 On April 1, a press conference is held in Ilsan CJ E&M Studio in the city of Goyang in Gyeonggi Province revealing the set of the drama “Memory.”

“Memory” is about a lawyer Park Tae Seok (Lee Sung Min), who is diagnosed with Alzheimer’s disease, fighting to survive the demands of his career as a lawyer. The drama’s theme focuses on the meaning of life and love of family. Director Park Chan Hong and writer Kim Ji Woo of dramas “Devil” and “Resurrection” team up again in three years for “Memory.”

Lee Sung Min notes that he portrays the role of a mentor in the drama “Misaeng” with Im Siwan. In “Memory,” Lee Junho portrays more of a helper role. Lee Sung Min comments, “Lee Junho’s character is a brother I can depend on. A very dependable character. Yesterday, we recorded a scene where we’re looking straight at each other. It felt strange. I believe our chemistry will be a different one than the one I had with Im Siwan in ‘Misaeng.’ Lee Junho brings out the refreshing quality to the drama.”

As the lead, Lee Sung Min conveys a range of emotions dominating the screen. He comments, “Up to episode 4, Park Tae Seok is in denial and cannot accept the Alzheimer’s disease diagnosis. The first two episodes depict events that happen in one day. It was difficult to portray those emotions.” Describing difficulties he faced as an actor, Lee Sung Min adds, “I was contemplating how to portray the misfortunes that overtakes his life all at once. I tried to balance my emotions, but I couldn’t control it very well.”

He notes, “As the drama storyline goes on, something pops up every time I calm down about things that are happening to me. We’re currently taping episodes 9 and 10. Park Tae Seok tries to accept his diagnosis and tries to coexist with it.”

Watch the first episode of “Memory” below.