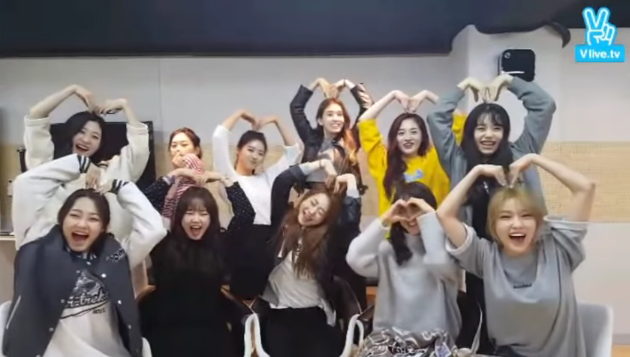 Fresh from the finale of “Produce 101” on April 1, the members of the newly formed girl group I.O.I have met their fans for the first time via a live show on Naver’s V app.

On the evening of April 3, the eleven members all sat down for a chat session with their fans and seemed thrilled about it!

Member Im Nayoung says, “This is finally the first day all eleven members have gathered together as a group,” and the other member says they’re excited and that it doesn’t feel real. Kim Sejeong jokes, “I feel like we’ll have to do a mission soon.”

They reveal that they’ve just wrapped up their first activities together, as they filmed their first photo shoot. Kim Doyeon says, “I didn’t have any experience doing photo shoots so I was so nervous.”

The members then compliment each other on how great they looked in the photo shoot. Im Nayoung says, “Although this is our first time, we’ll be very active on V app, so please watch out for us. Also, we’re working hard on preparing our song!”

They also all makes a big heart gesture with their arms to show their love for their fans.

Although it was previously reported by some media outlets that the members’ first advertisement would be for a liquor company, a representative from YMC Entertainment has responded by saying they are still in talks about the ad. Even if the group is signed to advertise for a liquor company, due to South Korean laws against minors appearing in liquor advertisements, only a few members would be old enough to appear in the ad. It looks like we’ll have to wait and see what the group’s first photo shoot was for!

Meanwhile, it was recently announced that I.O.I will be making their debut in May with a mini album.