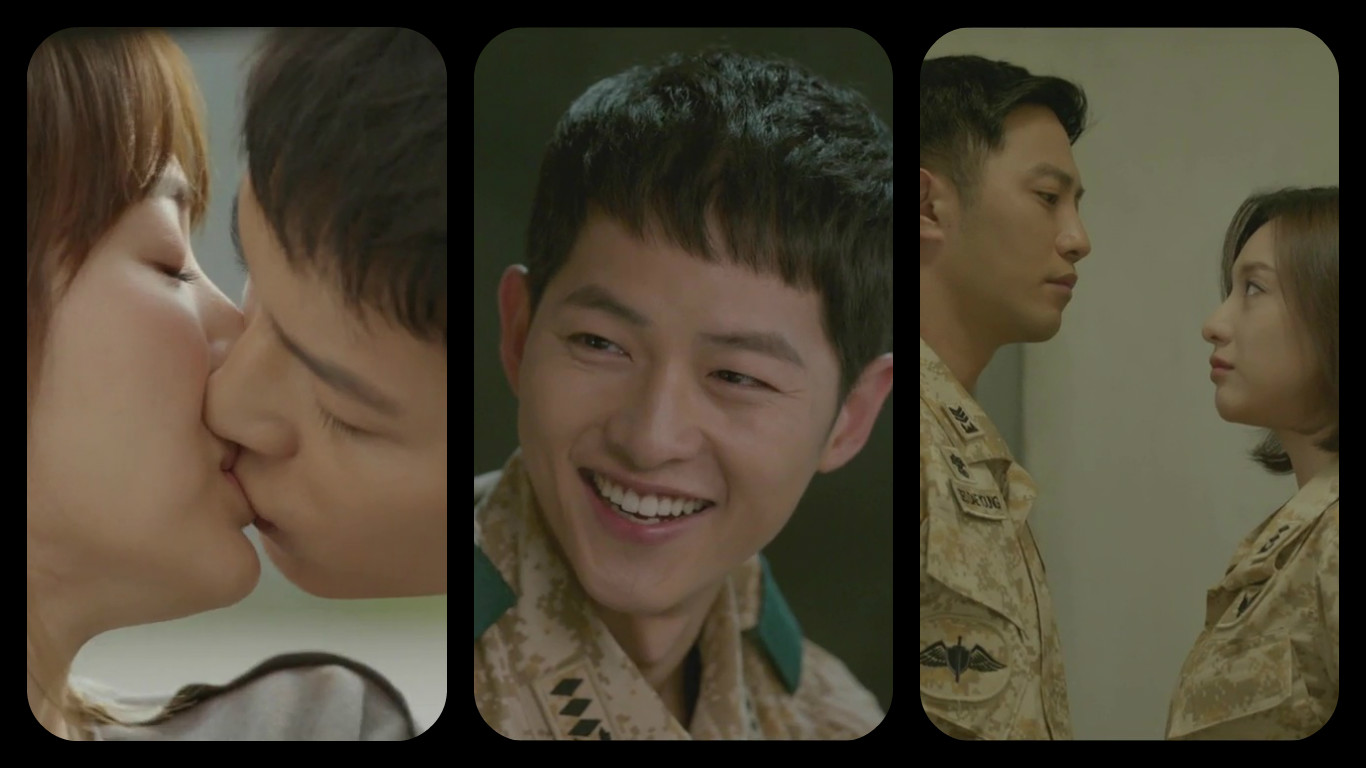 Unless you’ve been living in a K-drama box, you’ve most definitely heard of the military romance that is sweeping the entire world: “Descendants of the Sun.” It has reached over a billion people and penetrated the depths of Asia, touched corners of the world that may never have seen a K-drama, and spurred entertainment, political, and social discussions. The stars are experiencing new levels of fame. Fans locally and internationally get to indulge in the awesomeness of the show live every Wednesday and Thursday for a couple more weeks yet. Then we get to watch it as often as we want on Viki.

“Descendants of the Sun” has inspired you to check out (or re-watch) all of the actors’ previous works. Fans like you and I have been you’ve been very, very busy. Headliner Song Joong Ki’s “Penny Pinchers,” “Sungkyunkwan Scandal,” “The Innocent Man,” and “A Werewolf Boy” are his best known works, but there are so many more where he rocks our worlds. Then we have world beauty Song Hye Kyo’s dramaland changing dramas like “Full House” and “Hwang Jin Yi.” Or manly Jin Goo’s “Ad Genius Lee Tae Baek.” And let’s not forget the main lead maknae Kim Ji Won in sensations like “Heirs” and “Gapdong.”

The “Song Joong Ki effect” describes you on a personal level. Even if you’ve never heard the term before you can guess what it means because every time you see him, you feel a rush of emotion. You notice how handsome he is, how manly he is, how talented he is, how popular he is, how deep his voice is. It causes things like “Song Joong Ki Syndrome,” a disease whose main symptom is that you just can’t get enough of the gifted ‘85-line actor. His appearance in “Descendants of the Sun” keeps you motivated. Song Joong Ki, in a word, is an “icon” of Hallyu and you and I are enjoying every minute of it. 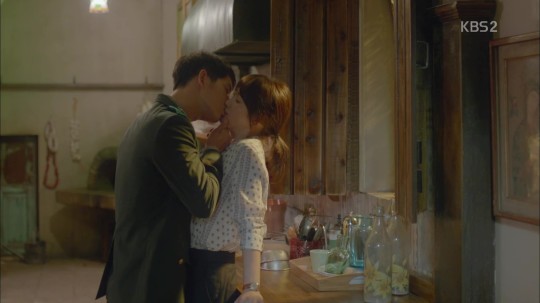 You know when all of your favorite moments happen. Song Joong Ki is shirtless in episode 1. He is joined by Jin Goo in episode 2. Onew shakes his groove thang in Episode 3. Yoo Shi Jin kisses Kang Mo Yeon for the first time in Episode 4, birthing the “Wine Kiss.” I could go on, but this post might grow to epic proportions because there are so many great moments to be documented in our “Fan Encyclopedia!”

You have become a massive fan of aniGIFs that visually document the special moments in your “Fan Encyclopedia.” They let you watch Seo Dae Young smile lovingly at Yoon Myung Ju over and over and over again. If you know how to make them, you’ve made one, or two, or a hundred. Shi Jin’s tears are never far away if you’re feeling melancholy and need a friend. A host of running, shirtless men are at your fingertips for when you’re feeling lonely. Dr. Song acting silly will be there for when you need cheering up.

On the days when “Descendants of the Sun” isn’t airing, you’re thirsting for news — and boy, is there plenty of news! Our actors are getting CFs left and right. Song Joong Ki is venturing out to meet his fans. The simulcasting in China is spurring all sorts of coverage. Jin Goo and Kim Ji Won are shooting pictorials. And you’ve read it all. You probably know it all by heart because you’re on Soompi, gleaning information. The “Fan Encyclopedia” also contains all the juicy morsels of “Descendants of the Sun” information and hype. News is as precious to you as Myung Ju is to Dae Young.

As if the drama didn’t already pack in enough romance, men in uniform, natural disasters, cool fight scenes, and epidemics, it also delivers stunning location shoots. Producers used the beautiful Korean countryside in Gangwon Province to shoot many of the often used buildings and locations. They also ventured halfway across the world to Greece and took advantage of the stunning blue waters, craggy oceanside cliffs, and expansive greenery. The teasing just may be too much for some of us fans: we need to visit these places for ourselves! Taekbaek, Jeongseon, Lemnos, here we come! 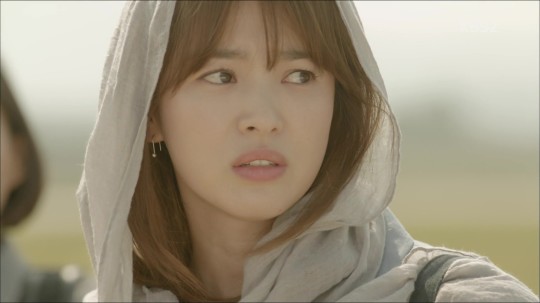 Not only do you know all the words to the extremely successful OST single “You Are My Everything,” but you’ve covered it on Youtube. Just like Gummy thanked the Song-Song couple for their hard work, fans thank Gummy and the show via their awesome covers.

If you weren’t a SHINee fan before, you sure are now. Onew plays the incredibly, heartbreakingly naive Lee Chi Hoon. He is a rich, privileged, kind doctor who is overwhelmed by the gravity of his duties in a third world country. His cheery disposition keeps him grinning, while his sense of obligation as a doctor often fills him with tears. It’s hard not to love and empathize with both Onew’s portrayal of Chi Hoon, and Chi Hoon himself.

(Siwon perfectly illustrates how happy you feel when the next episode finally comes out!)

Waiting a week for more Song-Song, Dae Young/Myung Ju, Dr. Song/Nurse Ha, cute Chi Hoon, adorable Gi Beom, and handsome Dr. Daniel is hard enough. Waiting longer than that is unacceptable, so you watch “Descendants of the Sun” on Viki raw while anxiously watching the subbing percentage climb. Go subs, go! Until they come out, you bring your laptop to work or school and watch the raw episodes during your lunch break. What better than watching cuteness in action warming your heart while a bowl of ramen warms your belly? 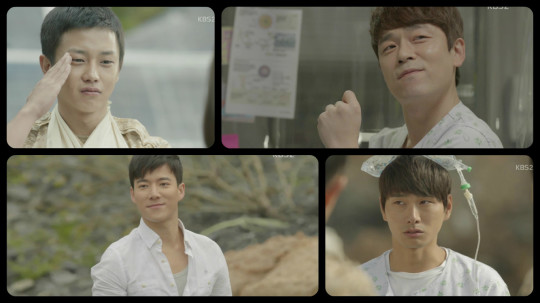 So Soompiers, have you experienced any of these symptoms yourself? What other “Descendants of the Sun” addiction signs have you shown?

Raine0211 is a lover of all things Korean. When she’s not writing for Soompi, she’s playing the cello and singing. She happily indulges in all kinds of K-pop, but her biases are SHINee, Infinite, and VIXX. She lives with her sister and her two cats, Timmy and Momo, all of whom also love K-pop and K-drama.