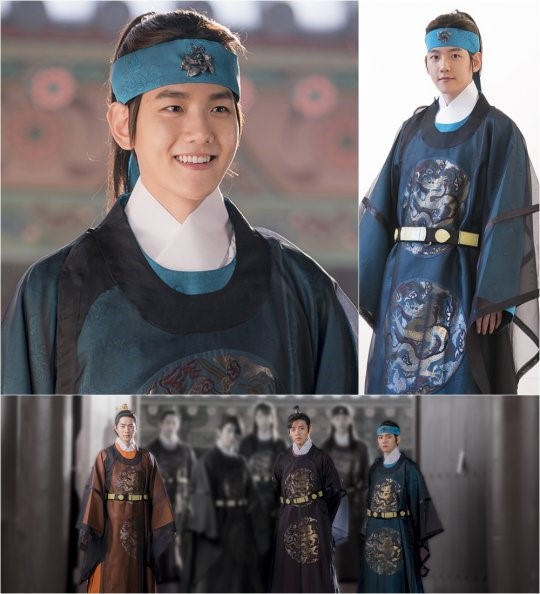 In the new stills from the upcoming drama “Scarlet Heart: Goryeo,” EXO’s Baekhyun is the latest actor to dress up in the traditional royal clothing of the Goryeo period.

Baekhyun will be playing the tenth prince, Wang Eun, in his first drama debut. Wang Eun is a playful character who acts like a middle schooler, but his playfulness is a mask for his shyness and inability to express his true feelings.

In the stills, Baekhyun is dressed in turquoise and sports a long ponytail, smiling brightly into the distance. In a full shot, he stands next to Hong Jong Hyun and Kang Ha Neul, whose stills were released previously. The other four princes are blurred in the background.

“He is working hard to pour his own unique personality into his character,” a representative for the drama said. “He is always listening to the staff’s suggestions and his energetic personality brightens up the whole set.”

“Scarlet Heart: Goryeo” will be releasing more stills of the “flower boy princes” through their official Facebook page in Korea, as well as Weibo in China and Twitter in Japan.

EXO
Scarlet Heart: Goryeo
Baekhyun
How does this article make you feel?