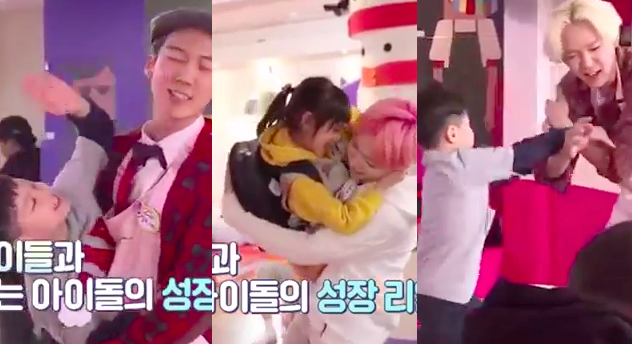 Watch: WINNER Gets Attacked by Kids in Teaser for New Reality Show

The guys of WINNER are taking on the challenge of befriending kids from the ages of 4 to 7 over a two-week period in this new show, and the teaser gives us a glimpse at how they react to the task.

The show first asks, “Do the 20-year-old guys of WINNER dream of being dads?” The members are pretty clear in their replies that it’s not something they’re currently dreaming about! Nam Tae Hyun says, “I’ve never said I want to be a dad.” Lee Seung Hoon just shakes his head, and Song Mino replies, “I’m still too young.”

As WINNER is shown being completely overwhelmed by the unruly kids, the caption promises, “This isn’t a childcare show! It’s a reality show about the development of immature kids and even more immature idols!”

The kids are pretty tough on the guys, hitting them and pushing them. At one point, Nam Tae Hyun walks into another room where the staff are watching and begs, “Please save me!”

WINNER recently invited the kids from the show on stage at their concert in Daegu on April 2, where they said hello to the crowd together and asked everyone to watch the show. “Half-Moon Friend” will air its first episode on April 23 at 9:40 p.m. KST on JTBC.