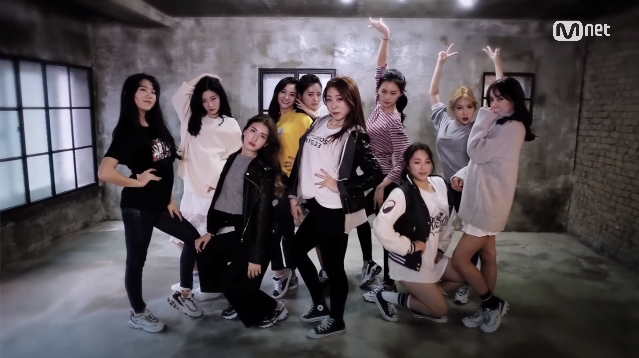 Looks like the previously released teaser was the actual footage of the music video.

While it may not seem like the usual high-budget K-Pop music video, keep in mind that the members of this group were just finalized a few days ago. Rather than spending time adjusting the choreography with the final group, it looks like they opted for a fun and behind-the-scenes style look.

It sure has been a busy weekend for the girls of I.O.I as it seems they have already started working on a music video.

A 30 second teaser for “Crush,” a pop dance song that all the contestants had preformed at the final episode, was revealed today.

In the teaser we see the 11 members dancing in a small room. Since they are in casual clothing and having fun with the choreography, this could just be them practicing before the actual filming. Clips of them singing in a recording studio are also seen.

As you might remember, the final 22 contestants performed full song together for “Produce 101‘s” finale.

After the announcement of the final members last Friday on “Produce 101”, there has been a barrage of news about their upcoming May debut. They recently opened their V channel and had their first photo shoot together.

I.O.I is currently planning to release a mini album featuring a brand new title track. The two new songs from the finale “Crush” and “When The Cherry Blossoms Fade” are expected to appear on the album.