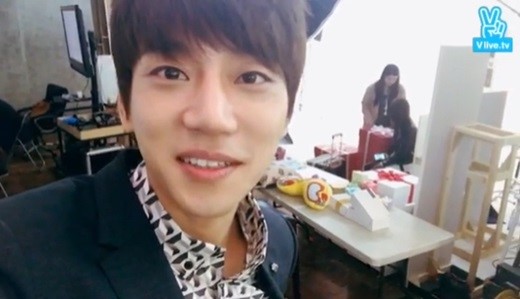 Hwang Chi Yeol Talks About His Immense Popularity in China

Singer Hwang Chi Yeol has opened up about how he is doing in China.

On April 4, he revealed the set for a photo shoot he did as the model for a duty free shop through a live broadcast on the Naver V app.

He shared, “Actually, I never thought I’ll end up like this either. I’m not an idol and I’m not a trend setter. I just worked hard for each performance that I was given and it ended up like this. My priority right now is to finish well on the Chinese version of “I Am A Singer.” I will work hard to have a good live performance next week. I honestly feel like I’m dreaming. Whenever I see my face at the airport, its exciting and unbelievable at the same time.”

Hwang Chi Yeol currently has the distinction of being the only foreign singer on the Chinese version of “I Am A Singer Season 4” since its first broadcast and has overtaken the domestic Chinese singers to take the top place on the show.

Being the only foreign singer that is about to obtain the title of the king of singers, he is raising interest in both Korea and China for what will happen next on the show.

Hwang Chi Yeol
I Am A Singer
How does this article make you feel?