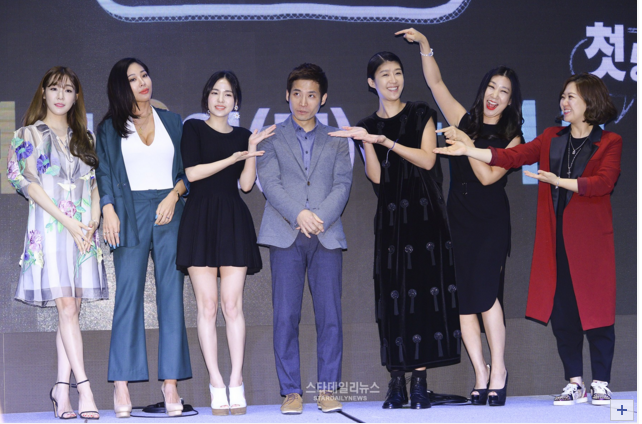 On April 6, the cast of the new KBS variety program “Unni’s Slam Dunk” held a press conference to celebrate the show’s upcoming premiere. It was attended by PD Park In Suk and cast members Kim Sook, Ra Mi Ran, Hong Jin Kyung, Min Hyo Rin, Jessi, and Girls’ Generation member Tiffany. During the press conference, the cast took some time to share their thoughts about each other.

Jessi laughs as she speaks about her relationship with Tiffany. “Tiffany’s a friend that I’ve known for a really long time,” she says. “She’s one year younger than me so honestly she should call me unni but since we’re from America, we just get along as friends.”

Tiffany also laughs as she talks about Jessi. “Occasionally while we’re recording, I ask the writers, ‘Did you bring me here just to translate for Jessi?’” she jokes. “I’ve known Jessi since the ninth grade when we went to the same school. Seeing her on camera and off camera is exactly the same.”

Kim Sook also shares some insights into her relationships with her fellow cast members. She says, “You should look forward to me and Jessi together. Jessi follows me well. Its an honor for me to be able to work alongside her.”

“If I were to add something else, Tiffany carries my water around for me,” Kim Sook continues. “When would Girls’ Generation’s Tiffany ever follow me around with my water? Ra Mi Ran is a caring unni so she takes care of her dongsaengs well and even though we’re the same age, I have a lot to learn from her. Hong Jin Kyung has big dreams. I was a bit taken aback by that. I think it’ll be fun to watch to see if her dream will come true.”

“Unni’s Slam Dunk” will give the members an opportunity to realize the dreams that they may have had to set aside or give up when they were younger. It is set to premiere on April 8.