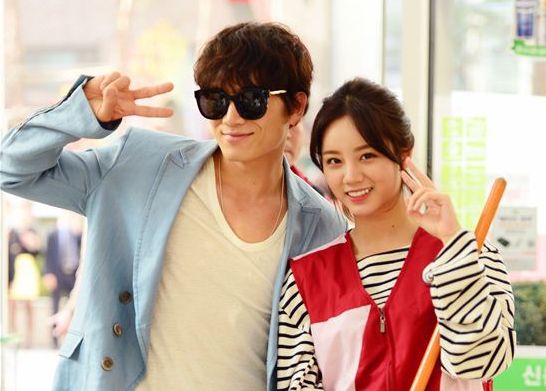 Girl’s Day‘s Hyeri has nothing but good things to say about working with a sunbae (senior) like Ji Sung.

On March 6, Hyeri sat down for an interview, where she revealed the great amount of faith she has in her co-stars, Ji Sung and CNBLUE‘s Kang Min Hyuk. These three will be starring in SBS‘s new Wednesday-Thursday drama, “Entertainer.”

She shares, “I’m learning a lot about acting from Ji Sung. He told me, ‘Hyeri, when you act, look only at my eyes. I’ll do the same when I act.’ When I listened to his advice and looked into his eyes, I realized what he was trying to say. These words from Ji Sung are a big source of strength to me.”

Hyeri also explains how her character, Geu Rin, is a master of part-time jobs and Ha Neul’s (played by Kang Min Hyuk) passionate older sister who only thinks about his safety. She wants to show Geu Rin’s fresh and joyful personality that is a reflection of her name.

Expressing the determination she has, Hyeri says, “It’s an honor to be working on a great production with such talented staff members and seniors, and I’m happy I can meet with my fans and viewers. While I am still lacking in many ways, I will put in a lot of effort to show good acting and want portray Geu Rin in a positive way to viewers.

“Entertainer” tells the story of how an audacious celebrity manager, Shin Suk Ho (played by Ji Sung), and a rookie band meet at their lowest points of their lives, and brainstorm a way they can live happier lives. Written by Yoo Young Ah, and directed by Hong Sung Chang and Lee Kwang Young, it will air following the end of “Please Come Back, Mister.”

Entertainer
Girl's Day
Hyeri
Ji Sung
How does this article make you feel?