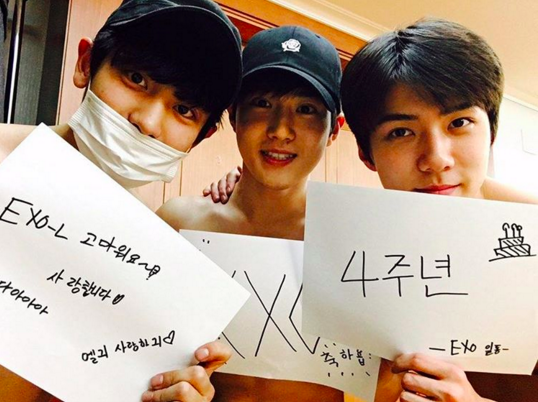 EXO is thanking their fans for four great years together so far in their own unique way!

On April 8, EXO member Chanyeol posted a photo to his Instagram of himself, Suho, and Sehun holding up handwritten signs for the camera.

Chanyeol’s sign reads, “EXO-L, thank you! I love you,” Suho’s sign says “EXO” and “Congratulations,” and Sehun’s reads, “Fourth Anniversary.” The important point that no fan could miss is that the signs are more than just ways to convey their messages for fans, they’re also covering up their shirtless chests!

EXO debuted on April 8 of 2012 with their debut track “Mama,” and have since become one of South Korea’s most popular groups, both domestically and internationally.

Share your favorite EXO moment with us in the comments!

EXO
Suho
Sehun
Chanyeol
How does this article make you feel?