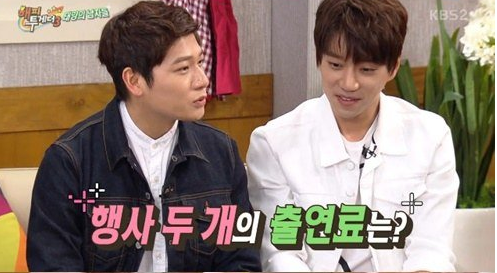 Hwang Chi Yeol revealed the staggering amount of money he is making in China.

On the April 7 episode of the KBS variety show “Happy Together 3,” he appeared as a guest alongside Zhang Yuan, who is his manager. Zhang Yuan said, “It’s to the point where we can’t walk around freely in China. Last time when we went to Beijing and Hong Kong, the airports were paralyzed. We had to use a hidden passageway.”

Hwang Chi Yeol added, “So many fans came that the fence broke. We needed the help of the special police to ride the car.”

When asked by the MCS about who is currently popular between him or Yoo Jae Suk, Hwang Chi Yeol laughed as he answered, “Right now.. I think me..”

He shared that currently, he is making a hundred times more in China when he appears for events than he makes in Korea and Zhang Yuan added, “We had to turn down two events so that we could appear on ‘Happy Together.’ That accounts for three hundred million won (or approximately $258,000),” astounding the MCs as he shared just how popular he is in China.

Hwang Chi Yeol
How does this article make you feel?