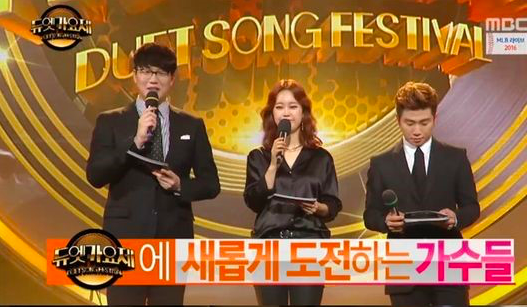 On April 8, MBC Entertainment broadcast its first official episode of “Duet Song Festival.” (The show had previously been around as a holiday special.) In “Duet Song Festival,” a singer is paired with an ordinary citizen to sing a duet together.

MAMAMOO’s Solar and Kim Jung Hwa started off the night with their rendition of Ailee’s power ballad “I Will Show You” and got 421 votes. Baek Ji Young and Choi In Hee followed their performance with Kim Hyun Sik’s “My Love By My Side” but didn’t make the cut at 401 votes.

Next, Min Kyung Hoon and Lee Sung Dam performed Wheesung’s “Can’t We” and edged out Solar’s team with 432 votes. Next, Kang Gyun Sung and Choi Ji Yae sang Lee Seung Hwan’s “Live a Long Long Time” but lost with 424 votes. Jessi and Kim Suk Gu followed up with g.o.d’s “Lies” but also failed to make the cut at 415 votes.

f(x)’s Luna and Goo Hyun Mo chose Lim Jae Bum’s “For You” and moved the audience, edging out Min Kyung Hoon by 435 votes.

Finally, EXID’s Solji and Doo Jin Soo, the winners of the Lunar New Year special of “Duet Song Festival,” performed Davichi’s “8282” and beat Luna to get the highest score and the final crown. The difference between their scores was by 1 vote, with Solji’s team taking 436 votes.

The pair will have the opportunity to appear on the next broadcast of the show. They also had the power to select another team that could participate in a future broadcast, and chose Jessi and Kim Suk Gu.