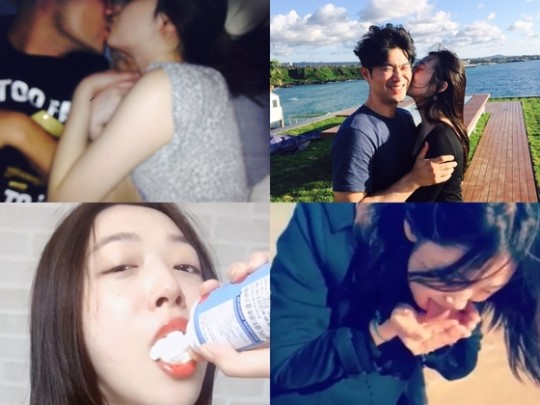 Former f(x) member Sulli is certainly turning heads with a recent picture she uploaded to her personal Instagram account.

The picture shows Sulli and her boyfriend Choiza kissing on a bed, though the upper portion of their faces is cut off. Reactions to the photo were mix, with a lot of the disapproving comments including, “Who on Earth took the picture?”, “I have no idea why she uploaded this,” and “Totally reckless.”

Many people seemed to think this photo was borderline explicit. Other pictures, like the photo kissing on the beach in Jeju, or certain pictures of her eating, were also considered almost vulgar.

Seeing how young Sulli is (she was born in 1994) and how her image as an f(x) member was that of your innocent girl-next-door type, netizens seem to think it’s a shame that she’s sharing photos such as this.

On the other hand, other people have commented that Sulli is an adult now, and that she’s no longer an idol. Still others have congratulated her on being so open about her relationship.

What are your thoughts on some of the pictures that Sulli posts?

Choiza
Sulli
How does this article make you feel?