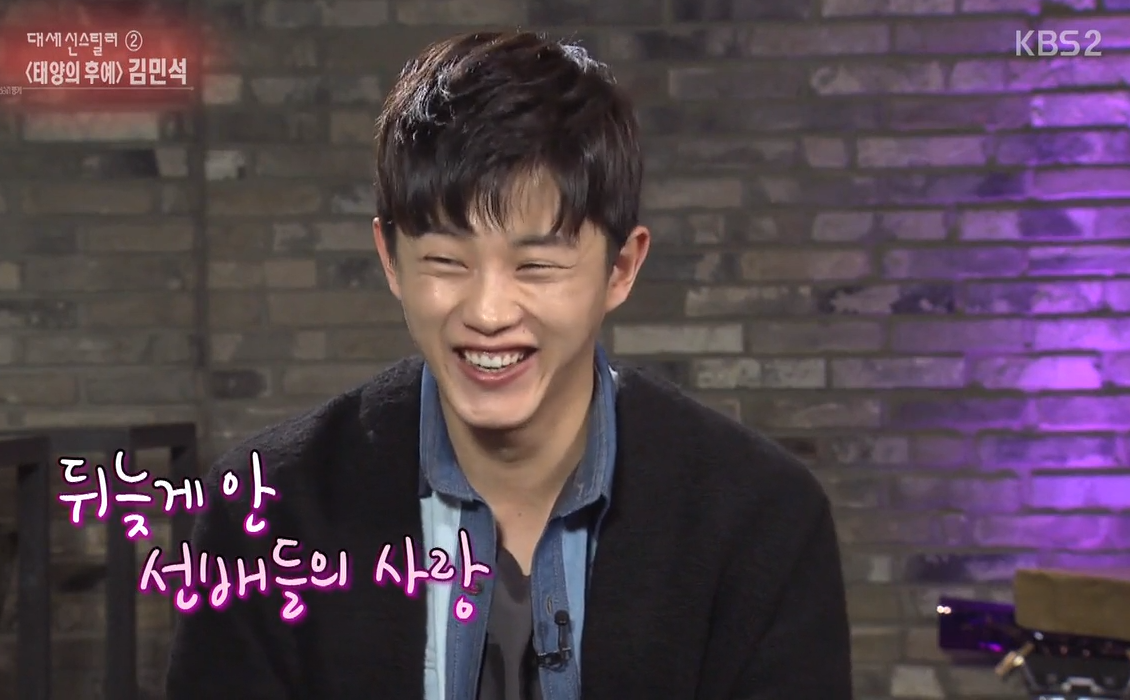 Even his “Descendants of the Sun” co-stars couldn’t help but show their affection for actor Kim Min Suk through their support.

On April 9, Kim Min Suk sat down for an interview with KBS 2TV‘s “Entertainment Weekly,” where he talked about his newfound popularity and his co-stars, Jin Goo and Song Joong Ki.

In the interview, Kim Min Suk mentions how his actual relationship with Jin Goo is similar to the close friendship their on-screen characters, Seo Dae Young (Jin Goo) and Kim Ki Bum (Kim Min Suk), have. Jin Goo always used to say to him, “You are a ‘Descendant of Dae Young.'” Kim Min Suk also says, “I always seem to follow him around. I’ll wait for him at his movie’s filming set, and then we’ll go eat good food and drink with each other. We call each other often too.”

The actor then reveals how Jin Goo and Song Joong Ki encouraged him, albeit in different ways.

Kim Min Suk explains, “Jin Goo is the type who’ll say, ‘Good job, you did everything well,’ while Song Joong Ki will say what needs to be said. He’ll help me by saying things like, ‘You have to do it this way so that you can appear at least one more time in the final cut.’ In reality, there were many aired scenes where I wondered if a solo shot of myself was even needed,” expressing how Song Joong Ki’s advice really worked.

While he admits he was frightened by Song Joong Ki’s stern nature, the actor shares how thankful he is to both actors.

With the finale coming up in just a few days, Kim Min Suk concludes, “It will become even more amazing as it goes on. You shouldn’t miss a single second,” heightening the anticipation for the last two episodes.

Watch Yoo Si Jin, Seo Dae Young, and Kim Ki Bum’s fateful meeting in “Descendants of the Sun” as well as the rest of episode one below!