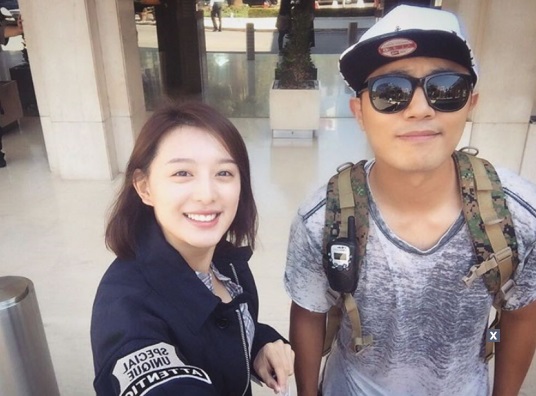 With just two episodes left until it ends, KBS 2TV‘s “Descendants of the Sun” has fans in heated debates about the possible finale.

Theories for the ending have been sweeping various online communities and social media sites. People try to present convincing arguments for potential outcomes that include everything from, “Yoo Si Jin (Song Joong Ki) will die,” or “Seo Dae Young (Jin Goo) will die” to “Yoo Si Jin and Kang Mo Yeon (Song Hye Kyo) will get married.” The drama’s production crew simply requests, “Please confirm the ending through the broadcast.”

Because “Descendants of the Sun” was 100 percent pre-produced, various preventive measures were taken, such as all the scripts being collected after filming, and forbidding both staff members and actors alike to speak on it, in order to prevent any spoilers from being leaked.

Similarly, in a recent interview, the actors were extra cautious when talking about the drama’s ending.

First, Jin Goo vaguely hints, “I can tell you for certain, without joking, that this drama will be more fun as it gets closer to the end. There will be more incidents, and more in-depth characterization. In fact, I think the beginning half is not as fun, compared to the latter half which gets more interesting as it goes on.”

Kim Ji Won, who plays Yoon Myung Joo, explains, “Everyone asks us things like, ‘Will they get married?,’ ‘Will they break up?,’ and ‘Who dies?’ So, we are being careful as well. Because it is pre-produced, spoiling the story takes away from the fun. So we are being very careful about this.”

The actress also mentions that scripts were collected even after filming in Greece, and she has not given anyone a single hint about the finale. She adds, “I even told my own mom, ‘Just watch it,’ when she asked.”

The 16th and final episode of “Descendants of the Sun” will air on April 14, when you can find out for yourself how this drama ends!

Make sure you’re caught up before then, starting with episode one right below: