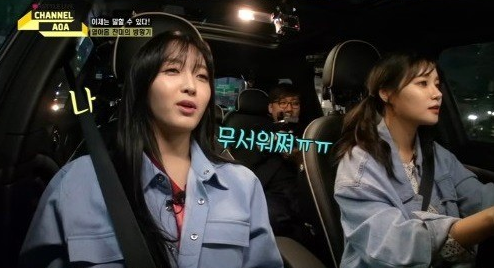 AOA member Chanmi shared how she overcame a difficult time after debuting as an idol.

On the first broadcast of “LIVE Onstyle LIVE CHANNEL AOA” April 12, Chanmi spoke of a period shortly after the group achieved its first No. 1 on the charts with “Mini Skirt.” “We had already finished the photo shoot for ‘Short Hair,’ but I just felt so frustrated. I wondered if this was really the dream that I had been wanting at this age. And instead of sharing how I felt and talking about it with the members, I was young and immature and I just ran away.”

She continues, “Jimin came and found me. It was a chase to come get me.” Choa then adds, “I had started college and became a singer so, even though it was difficult, I knew that I should stay strong and persevere. On the other hand, Chanmi had chosen this path when she was in middle school and so it could have been a premature decision [from her perspective]. So I think she had been confused if this was the road she wanted to be on.”

However, the story ends on a happy note. Chanmi says she has gotten past that and is even happier now, laughing as she adds, “I’ve learned that the outside world is scary. Everyone, home is the best.”

Meanwhile, “CHANNEL AOA” will show the many different charms of the AOA members each episode. You can catch the show on Onstyle at 12 a.m. KST.

AOA
Channel AOA
Chanmi
How does this article make you feel?