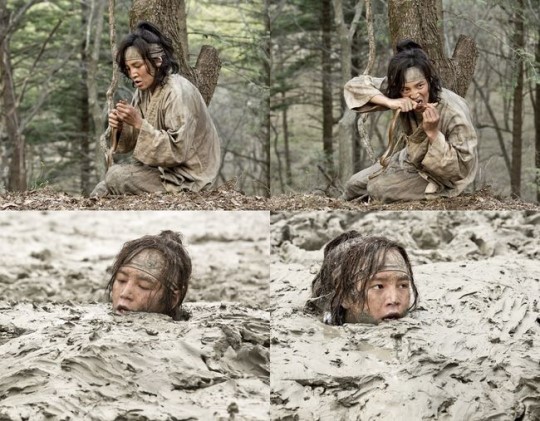 Actor Jang Geun Suk recently impressed not only audiences but the production staff with his commitment to realistic acting in “Jackpot.”

In Episode 6, which was broadcast on April 12, Jang Geun Suk’s character, Dae Gil, was stabbed and fell off a cliff, breaking his arms and legs. In order to survive, Dae Gil has to rely on eating snakes for food.

The producer, Nam Gun, said, “The mud flat scene and the snake scene were filmed exactly as they were written in the script. We discussed it with Jang Geun Suk at our very first meeting and we decided not to fake it. Jang Geun Suk was happy to take on a new challenge.”

He added, “There was a good atmosphere on set on the day of the mud flat scene. Since it took place after the snake eating scene, he wasn’t too worried about it. On the day of the snake scene though, the entire staff was worried. But Jang Geun Suk made them laugh with jokes.”

The PD also revealed that Jang Geun Suk had to do two takes in order to film the snake skin peeling properly. “He’s an amazing actor,” he concluded. “Although the set can be mentally and physically draining, he always works hard and respects his seniors and the staff. I feel like a viewer myself watching to see how well he portrays this character who has lost everything.”

Watch the latest episode of “Jackpot” below:

Jang Keun Suk
Jackpot
How does this article make you feel?