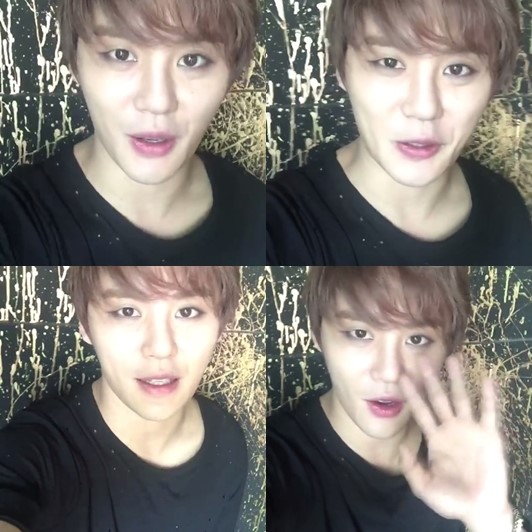 It seems like the whole of Korea has fallen in love with KBS’s “Descendants of the Sun,” celebrities and civilians alike!

On April 14, JYJ’s Junsu, who sang the track “How Can I Love You” for the “Descendants of the Sun” soundtrack, surprised fans with a live broadcast via Facebook Live.

“I’m suddenly greeting fans on SNS. It’s amazing that it’s possible to do this live,” Junsu said. “The reason I’m greeting you all is because I heard that my OST track made it to No. 1 on the charts. It’s all thanks to all of you.”

Junsu continued, “I’ve also been a big fan of ‘Descendants of the Sun’ and I’ve been watching religiously. I can’t believe it’s already on the last episode. I wonder if the success of my OST track isn’t in part due to the popularity of the drama.”

As of April 14, Junsu’s track “How Can I Love You” had earned a “perfect all-kill,” sweeping the No. 1 spot on all eight of Korea’s largest music portal sites.

Meanwhile, Junsu is currently preparing for the release of his fifth solo album, which is set to drop in May.

Descendants of the Sun
Junsu
JYJ
How does this article make you feel?