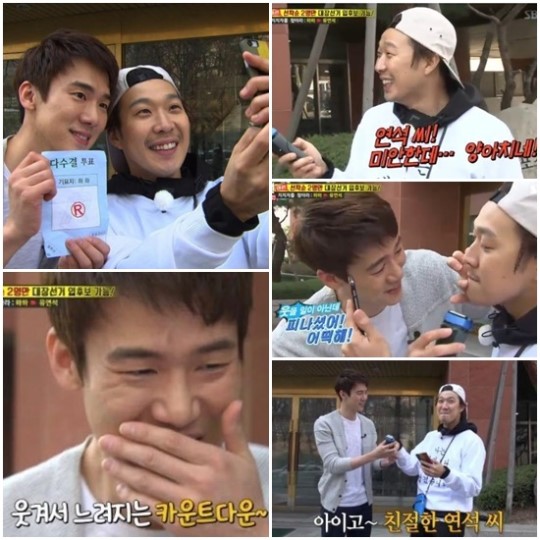 After Yoo Yeon Seok made an appearance in the April 3 episode of SBS’s “Running Man,” he sat down for an interview for his upcoming movie and talked about his brief cameo.

In the episode, the “Running Man” members were required to find celebrities with certain attributes. Haha’s mission was to find a celebrity who had served as student council president when they were in school.

“When I was sleeping, I received a phone call from an unknown number,” Yoo Yeon Seok shared. “I thought it was a delivery so I answered it but it was Haha. He said he originally thought of Lee Seung Gi but asked me instead because he was in the army.”

Later in the episode, Lee Kwang Soo contacts Yoo Yeon Seok and instructs him to give Haha a “shaving” mission. Haha is flustered and says, “Are you sure you were a student council president and not a devil?”

Eventually Haha completes the mission, but accidentally cuts himself shaving. At the end of their meeting, Haha tells Yoo Yeon Seok, “Please come on ‘Running Man’ sometime,’ jokingly making it sound like a veiled threat.

“It was funny to see Lee Kwang Soo and Haha try and mess with each other,” Yoo Yeon Seok said. “But I felt sorry for Haha who suffered a lot. I want to apologize to him.”

During the mission, Yoo Yeon Seok briefly mentioned his upcoming movie. “I actually promoted my movie a lot more than that,” he said. “It was edited out. But I’m satisfied that all of it wasn’t cut.”

Yoo Yeon Seok
Running Man
How does this article make you feel?