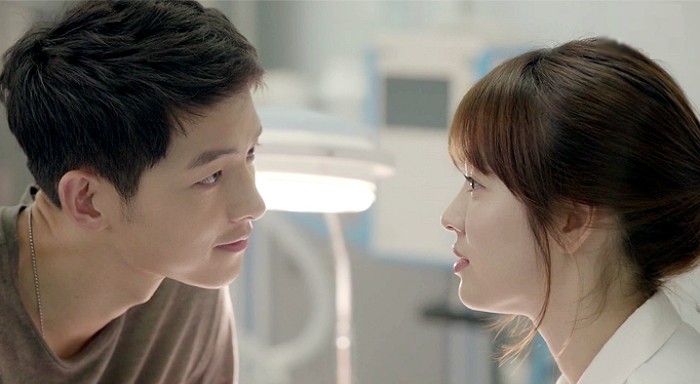 As the incredibly popular “Descendants of the Sun” has drawn to a close, lead actor Song Joong Ki recently sat down for an interview to talk about the drama.

During one segment, the interviewer mentioned that his chemistry with Song Hye Kyo was so good that dating rumors surrounded them throughout the drama’s run. The interviewer also asked if his ideal type had changed as he grew older.

“There were a lot of articles written about my ideal type,” Song Joong Ki said. “But my ideal type is still a wise and sensible woman. I think that’s the most important thing and that hasn’t changed.”

On working with Song Hye Kyo, he said, “I spent the most time with Song Hye Kyo noona during the drama filming so she helped me a lot. She’s a sunbae that I can never catch up to, but when I saw how hard she works, I thought her reputation was well-deserved.”

“She is very respectful of the people around her,” he added. “In Episode 15 and 16, the character Kang Mo Yeon had a lot of crying scenes. It must have been hard for Song Hye Kyo to portray an emotional scene without anyone else, but she got very absorbed in her acting. So I felt grateful to her. I thought that as a hoobae, I had to follow in her footsteps. Her personality is very confident and I felt that that is also something I should learn from her as a hoobae.”

You can see the two actors’ chemistry for yourself in the finale below!