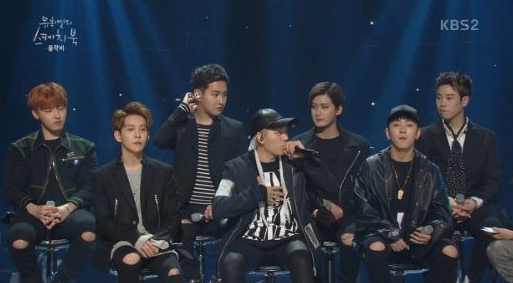 Block B Members Tease Zico About His Solo Activities

The members of Block B ganged up on leader Zico about his solo album promotional activities.

On the April 16 broadcast of the KBS show “Yoo Hee Yeol’s Sketchbook,” Block B is the guest and the result is quite funny.

Yoo Hee Yeol introduces the group, saying, “Many people think that if you are an idol, you lose musicality. But these people have broken that stereotype. They started from the underground scene and have become the hottest trend these days.”

After the introduction, Park Kyung says, “I’m really nervous because this is my first time on the show. I really wanted to come on the show because I’ve heard that I look similar to Yoo Hee Yeol sunbaenim.”

Yoo Hee Yeol then asks, “People have said that Block B has had to wait longer to promote because of Zico,” and P.O. answers, “Since Zico is our leader, we thought it would be a good opportunity for him to get more acknowledgement for our group so we encouraged him to go on other shows. But suddenly, he releases a solo album and even went on ‘Infinite Challenge.’ So, I think it’s a good time to talk about this stuff now.”

Park Kyung chimes in, “I’ve known Zico since we were little. When his solo album came out, I really supported and encouraged him. I thought that at least there’ll be at least one track on it with me. But he even moved houses and he changed his car.”

Yoo Hee Yeol then turns to Zico and asks, “Why didn’t you feature your members on your album?” Zico answers, “When I think about who to ask to feature on my album, I think of people who are able to fill in aspects that I can not fill by myself. But such an image didn’t really come out in my album for my other members. I focused on the music aspect of the album and not on the human aspect.”

In response, Yoo Hee Yeol comes up with a fun proposition to see if it is true that the members didn’t fit in with his album. He asks U-Kwon and Taeil to try their hand at a song on Zico’s solo album called “Boys And Girls.”

After their rendition of his track, Yoo Hee Yeol teases, “I really like the original track and I like Babylon a lot, but Babylon can’t come up to their level.”

Check out their rendition at the 5:48 mark on the video below!