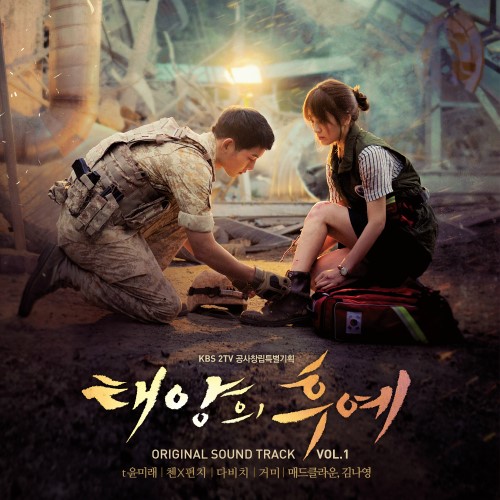 The “Descendants of the Sun” OST has set a new sales record!

The songs from the soundtrack were released in Korea and China throughout the drama’s run and frequently topped the music charts soon afterwards.

Music industry representatives said, “Although it’s not an exact calculation, if all 10 OSTs took the No. 1 spot on domestic music charts and stayed in the top ranks for 2 months, then the earnings from digital sales might be around 1 billion won (about $872,000).”

Looking at album sales of Volume 1 of the “Descendants of the Sun” OST and the soon-to-be-released Volume 2 reveals a sales record of about 60,000 albums. With an average price of 15,000 won, the earnings from album sales alone would be around 900 million won (about $785,000).

In China, the 10 songs from the OST were bundled together in a package and sold through the music site Kugou. So far the site has recorded a sales record of 260,000 albums, resulting in a profit of around 936 million won (about $816,000). (The package was sold at a lower price than the Korean album.)

Taking into account all of the above, the estimated total earnings from the OST is 2.8 billion won (about $2.4 million). If the album continues to do well in the future, the profits may rise to as much as 3 billion won.

All the songs on the “Descendants of the Sun” OST were pre-produced and features the artists Yoon Mi Rae, EXO’s Chen and Punch, Davichi, Gummy, Mad Clown and Kim Na Young, K.Will, Lyn, SG Wannabe, MC The Max, and JYJ’s Kim Junsu.