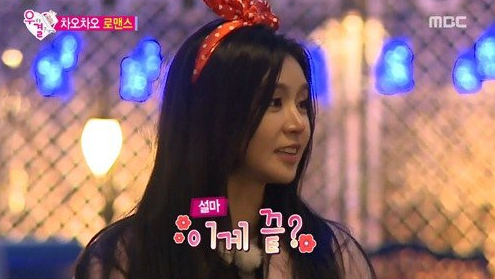 Fiestar’s Cao Lu has proven that she is not easily impressed.

On the April 16 broadcast of MBC’s “We Got Married,” Jo Se Ho prepares a proposal for his virtual wife Cao Lu.

Although she repeatedly asks if he is going to propose to her or not, Jo Se Ho never gives her a direct answer and keeps avoiding it.

When it becomes nighttime, however, he starts his proposal for her. As lights come on one by one, the night sky is brightened by a love message for her. Despite this extravagant scene, Cao Lu looks at Jo Se Ho and asks, “Is this all?,” which takes him by surprise.

Cao Lu says later in her interview with the staff, “I guess I’ve watched a lot of dramas. In the dramas, the lights would have come on and fireworks would go off. So that’s why I asked ‘Is this the end?’ He was so taken aback. It was cute when he was surprised like that.”

Check out Jo Se Ho’s proposal in the clip below. Do you think it was a good proposal?

Cao Lu
Jo Se Ho
FIESTAR
We Got Married Season 4
How does this article make you feel?