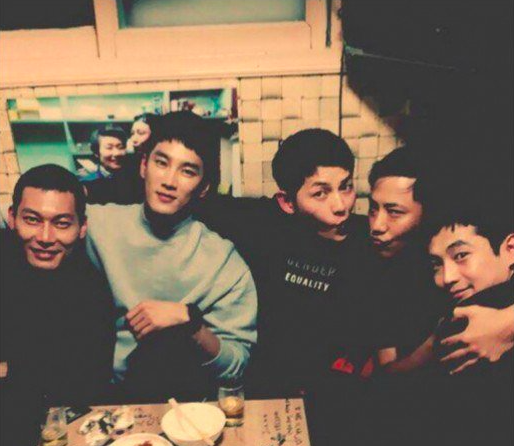 Song Joong Ki and Jin Goo Show Off Their Bromance

Move over, Song-Song couple – Song-Goo couple is in the house!

On April 18, “Descendants of the Sun” star Jin Goo shared a photo of some of the cast at a shop of a cast member’s mother. He writes, “This is our ‘Taebaek hot place.’ Everyone in the Alpha team. Cozy at Sergeant Choi’s mother’s place. She has displayed pictures of the Song-Song couple and of me, but she doesn’t have pictures of her own son. Actor Park Hoon, work harder!”

Aside the friendly atmosphere apparent in the picture, Jin Goo and Song Joong Ki are making kissy faces at each other. The bromantic picture was shared alongside pictures of Jin Goo with his mother and Song Joong Ki and Song Hye Kyo, making the pose even more hilarious by comparison.

If you haven’t had enough of “Descendants of the Sun,” make sure you tune in for the three special episodes that will air this week, starting on April 20 KST!

Correction: April 19, 2015 KST
An earlier version of this article misstated that the cafe was run by Jin Goo’s mother. It is actor Park Hoon’s mother.

Song Joong Ki
Descendants of the Sun
Jin Goo
How does this article make you feel?