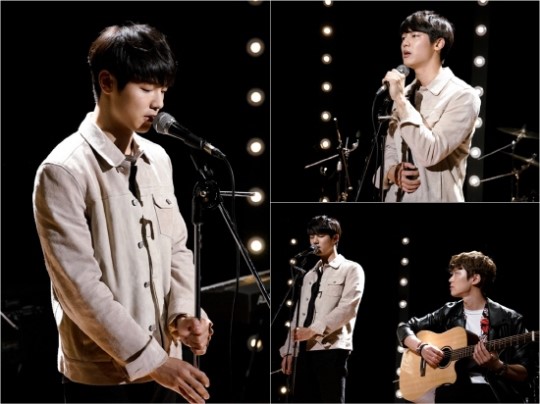 On April 19, SBS’s upcoming drama “Entertainer” released stills of Kang Min Hyuk performing what appears to be his debut stage.

Kang Min Hyuk plays the character of Ha Neul, who is recruited by the struggling manager Shin Suk Ho (Ji Sung) as the vocalist for his new band “Ddanddara.” The guitarist next to him is a character named Kyle, who graduated from Juilliard.

The two characters are taking to the stage for the first time together in the new stills. Kang Min Hyuk looks nervous and holds the mic tightly with his eyes closed. Kyle stares at him blankly, leaving audiences curious as to what is going on between the two of them.

The scene in question was filmed on April 11 at a university in Gyeonggi-do. It is reported that Kang Min Hyuk got absorbed in the scene as if it really were his debut stage, despite having performed in the band CNBLUE for many years.

“Entertainer” is scheduled to air its first episode on April 20 at 10 p.m. KST.

Entertainer
Kang Min Hyuk
How does this article make you feel?