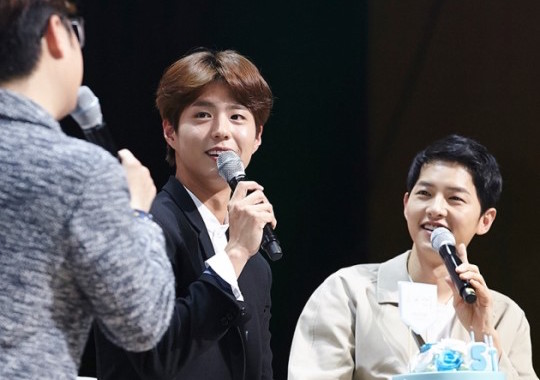 These two puppy-faced actors have such a cute friendship!

On April 17, during Song Joong Ki’s Seoul fan meeting, Park Bo Gum appeared as a surprise guest, to the excitement of 4,000 fans.

When asked if he’s ever been touched to the point of tears by something Song Joong Ki did, Park Bo Gum replies that Song Joong Ki takes care of him in many ways while trying not to be obvious about it. He says that he’s even received electronics as a present from Song Joong Ki.

When the MC pushes them for details, Song Joong Ki explains, “He was using a cellphone that was too beat up, and I gave him a different cellphone. It wasn’t new, but rather a phone I used to use. But…”

While Park Bo Gum tries to argue that it was okay, Song Joong Ki continues on, “The most surprising thing is that he used it for a very long time. I was really, really sorry.”

However, Park Bo Gum exclaims that it was okay because it was used nicely and didn’t have any marks, swearing that he wasn’t exaggerating.

The two actors belong to the same agency, Blossom Entertainment, and are known to be close friends. Park Bo Gum even personally designed the logo for this fan meeting, reaffirming the two’s strong, brotherly relationship.