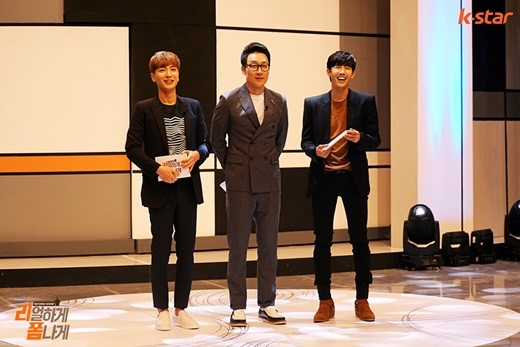 A new variety show called “Reform,” starring Super Junior’s Leeteuk, ZE:A’s Kwanghee, and Lee Hwi Jae will be airing its first episode next month. This is a fashion variety show where stars reform their own clothes with the help of top designers and compete with each other to become the best in fashion.

The three of them conducted an interview on how confident they feel about fashion. Leeteuk said, “I exercise and have a good diet so the clothes will fit me best.”

When asked who he thinks is the best dresser out of the three MCs, Leeteuk jokingly said, “Kwanghee needs to take out his shoulder pads and Lee Hwi Jae is just tall.”

Then Kwanghee started talking about his interest in fashion, saying, “Fashion is my passion and my life. I am the next fashionista in the entertainment industry after G-Dragon,” and picked Lee Hwi Jae as the worst dresser. Kwanghee explained, “Lee Hwi Jae wears the same clothes and the same shoes all the time. If I were as tall as him, I would dress a bit nicer.”

To this, Lee Hwi Jae defended himself, saying, “It’s not that I can’t dress well. I just have a simple fashion style. That’s the style I like the most, and even Hollywood stars are seen wearing just jeans and a white t-shirt.”

However, he did admit to having the least amount of items in his closet, saying, “I don’t have as many clothes as other celebrities. I just have two or three suits, two pairs of dress shoes that are black and brown, and a few jeans and shirts.” But Lee Hwi Jae explained, “I’ve been letting my passion for fashion rest for a while. I’ll show off my hidden fashion sense on this show.”

Who do you think will be the best on this show?