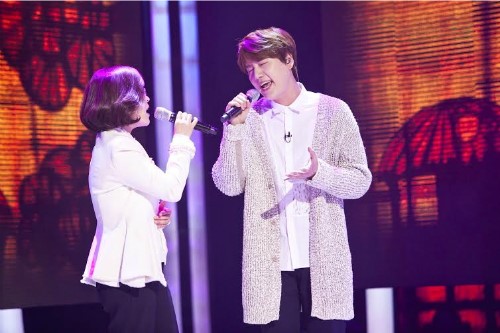 On the episode of SBS’s “Fantastic Duo” that aired on April 24, the two sing Lee Sun Hee’s hit song “Fate.”

Even before filming started, Kyuhyun shows signs of nervousness, making mistakes such as bringing two microphones to the panel area and missing the starting beat of his song with Lee Sun Hee.

Lee Sun Hee continues to encourage Kyuhyun and tries to ease his nerves by looking at him with warm eyes during the song.

After the stage, Lee Sung Hee says, “This song is in a woman’s key, so I’m proud of Kyuhyun for finishing the song. He sang with sincerity. I wanted to lock eyes with him, but I didn’t in fear that he would get nervous.”

Kyuhyun, too, says joyfully, “I’ve fulfilled my lifelong wish,” though his legs seem to be giving way from nervousness.

The two have met previously through the app “Everything,” each singing the female and male version of “Meet Him Among Them,” and having a surprise meet through a mobile live show.

Fans can see the highlights of “Fate” through Naver’s TVCast.