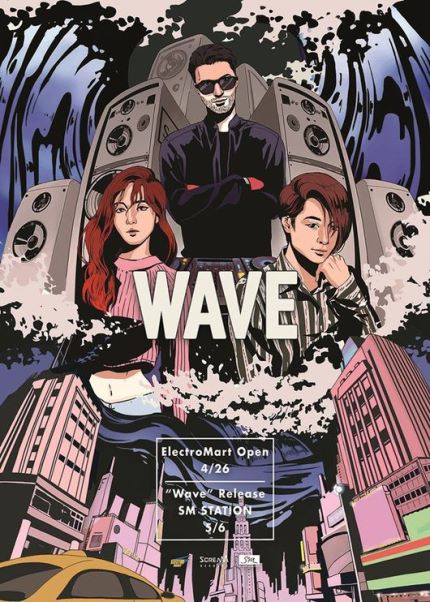 ScreaM Records is one of SM’s 2016 projects, which had been revealed in January through the presentation show “SM TOWN: New Culture Technology.”

Made to adapt to the music scene which is evolving from “performances meant to be listened and watched” to “performances made to be enjoyed,” it will be collaborating with the hottest EDM DJs both in and outside of Korea.

“Wave” will be released through SM’s digital music release channel STATION, which will launch new music every Friday. Fans are eager to see STATION, which is releasing a wide variety of tunes, collaborate for the first time with a business company.

Meanwhile, on April 26, all the artists who took part in “Wave” will be at the opening of Electro Mart at Yeongdeungpo for a showcase. Not only will the stage for “Wave” be revealed for the first time, but the music video for it will be filmed simultaneously as well to accurately depict the energy of the scene.

“Because this song is a collaboration between the best producers in and out of Korea along with K-pop artists, we are excited that it will have a large impact on the EDM scene,” a ScreaM Records representative said. “Our goal is to provide opportunities to producers who have yet to be discovered and produce world famous DJs from the Asian scene.”

SM Entertainment
miscellaneous
How does this article make you feel?