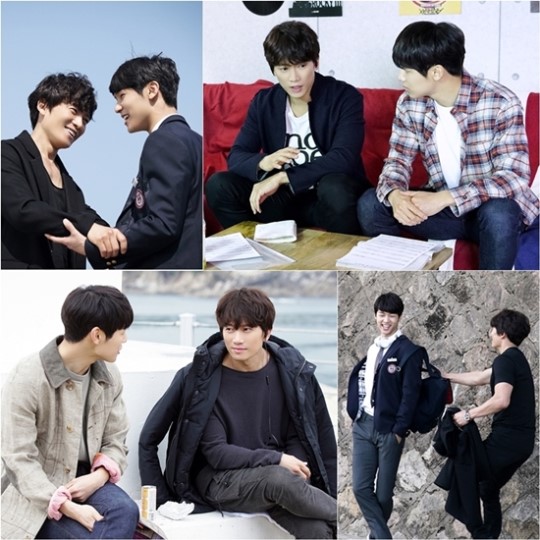 On April 25, SBS’s new drama “Entertainer” shared some behind-the-scenes stills of actors Ji Sung and Kang Min Hyuk, as well as insights into their on-set relationship.

In the photos, the pair are seen fooling around on location after a blooper, as well as practicing their lines, and taking a break together between shots.

A representative from the production team of “Entertainer” says, “The two actors have a lot of scenes together, and so they became close very fast.” They add, “In particular, Ji Sung is incredibly passionate about his work while filming, and the younger actors see that and are learning a lot from him.”

They describe how Kang Min Hyuk follows Ji Sung around while calling him hyung-nim, a respectful way to address his older co-star. “Ji Sung affectionately takes care of Kang Min Hyuk, and the two of them are always together, whether they’re practicing lines or chatting,” the representative says. “Their bromance warms up the whole set. Please look forward to their boss/employee bromance in the drama.”

“Entertainer,” starring Ji Sung, Kang Min Hyuk, and Hyeri, tells the story of a former entertainment company director (played by Ji Sung) who starts his own company and recruits Kang Min Hyuk’s character as the vocalist of his new band. The drama airs on Wednesdays and Thursdays on SBS.

Entertainer
Ji Sung
Kang Min Hyuk
How does this article make you feel?