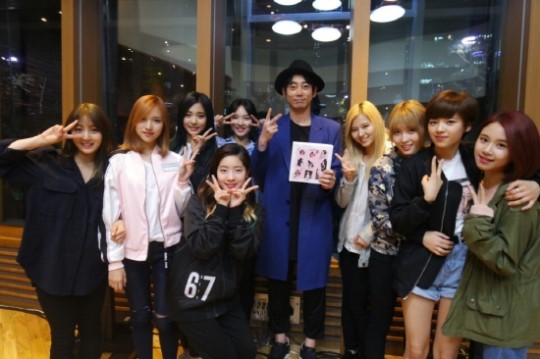 On the April 27 episode of MBC FM 4U’s “Tei’s Dreaming Radio,” TWICE, who has returned with “Cheer Up,” appears as guests and holds an honest conversation.

On their first place status on music charts, they say, “We still can’t believe it. We’ve been looking up music charts again and again because it is so unreal and like a dream.”

When Tei asks if Park Jin Young gave any advice after their comeback, they say, “We haven’t been able to see him since the release of the song, but before that he told us everything would go well.”

When asked if Park Jin Young complimented them while recording, Jungyeon says, “I didn’t receive any praises.”

One of the listeners ask if she has listened to the radio episode in which Gong Seung Yeon appeared, and Jungyeon says, “I was filming a music video, but I made sure to listen to it. I also heard her saying she would like to have Tzuyu as her sister though.”

“I heard that she bought TWICE’s CDs with her own money and gave them as presents to her drama staff,” Jungyeon adds, showing her love for her sister. Gong Seung Yeon is currently appearing in “Master: God of Noodles.”