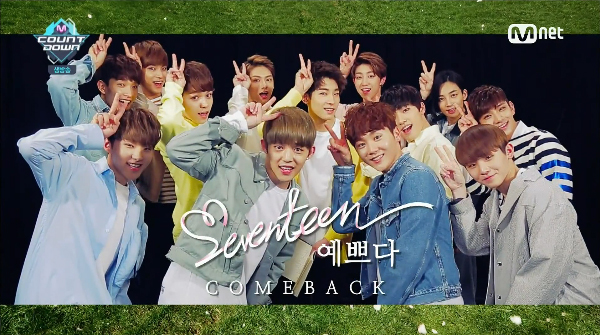 SEVENTEEN Reveals The Secret Behind Their Energetic Performances

Seventeen revealed that food is the key to their pwoerful stages.

On the episode of “M! Countdown” aired on April 28, the group made a comeback with the title track of their first full album “LOVE&LETTER,” “Pretty U.”

When asked by Star News during an interview before their stage, “How does it feel like to be so popular after only a year after debuting?” the group answered, “We can’t really tell if we’re popular or not. We’re still thankful, though, for all the support of people even before our comeback.”

“We’re even more energetic than before because we’re performing with other groups that debuted around the same time as us, like TWICE and Lovelyz,” the group said. “We will work our hardest to show our best performances.”

When asked what the team is best at, they replied, “We’ll have to say that a stage that can only be created with 13 members is our specialty. We would like to entertain more people with our energetic selves.”

To support their statement, the group said that food is the main source to their energetic stages.

“We never miss a meal,” the group said. “Though some members occasionally eat hongsam, our power comes from our daily meals.”

“When we make ramyun, we cook at least 20 bags at a time,” SEVENTEEN leader S.coups said. “We charge our energy by cooking them all in a really big pot.”

The group had also previously mentioned when on “Cultwo Show” that they eat 50 people’s worth of meat at a restaurant.

Meanwhile, the group released their album “LOVE&LETTER” on April 25 at midnight. This is the first time they’ve released a full album since their debut a year ago last May. In “Pretty U,” they approach their fans with the lovingness of a boyfriend and the upbeat sound only compliments the sweet song.

“LOVE&LETTER” has ranked high on music charts in not only Korea but also in iTune’s top 20 in Singapore, Thailand, Indonesia, Japan, Hong Kong, and 10 other countries as well. 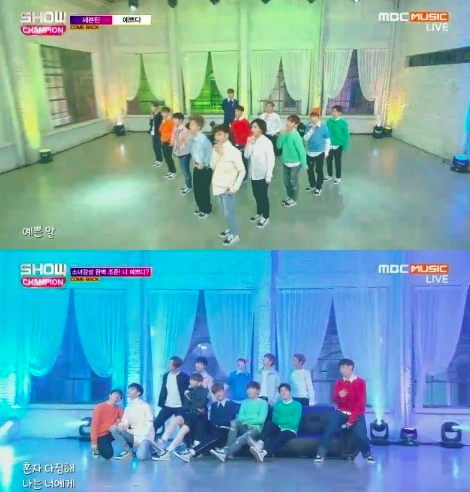 SEVENTEEN
Star News
How does this article make you feel?