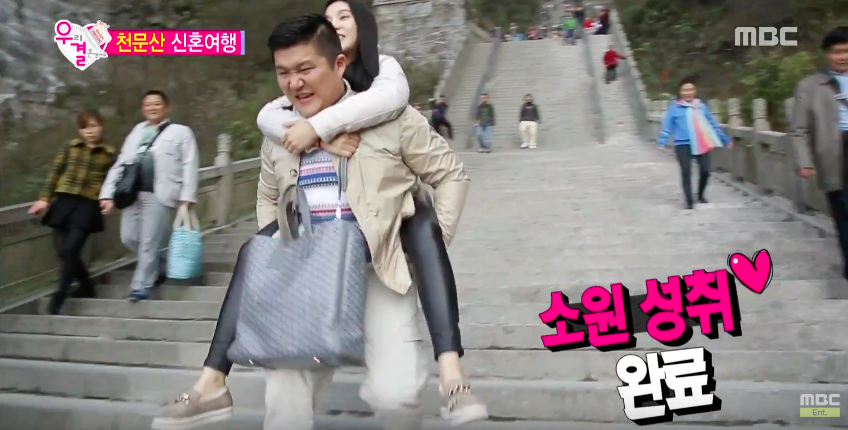 Jo Se Ho and FIESTAR’s Cao Lu continue to get to know each other on “We Got Married.”

On the April 30 episode of the MBC variety show “We Got Married,” Cao Lu takes Jo Se Ho to her motherland of China to enjoy their honeymoon.

On this episode, they visit famous tourist attractions in Zhangjiajie, including Cheonmun Mountain. They take a thirty minute cable car up to the top of the mountain and although at first they share pleasant conversations with each other, Jo Se Ho becomes more scared as the cable car climbs higher.

The summit is even more problematic as they walk to the “glass bridge” that makes it seem like you are walking on clouds. Jo Se Ho becomes so scared that he starts to cry, but Cao Lu kindly remarks, “Seeing him that scared was really cute.”

Their meeting with the Miao people, an ethnic minority in China, is also a fun event. The Miao people perform a traditional dance for them and Jo Se Ho in turn also performs “What About My Age” for them, but when they start to sing along with him, he is shocked that they can follow along with the song.

Later, Jo Se Ho proves to Cao Lu that he is, in fact, a Hallyu star, when they meet Chinese fans. As they are walking, fans yell out Jo Se Ho’s name in Chinese and he proudly takes a selfie with them.

Cao Lu, in a later interview with the show’s producers, states, “I was so surprised next to him. They say that China’s prince is Hwang Chi Yeol. So let’s say that Jo Se Ho is China’s son-in-law.”

Check out clips from their fun honeymoon in China below!

Cao Lu
Jo Se Ho
FIESTAR
We Got Married Season 4
How does this article make you feel?