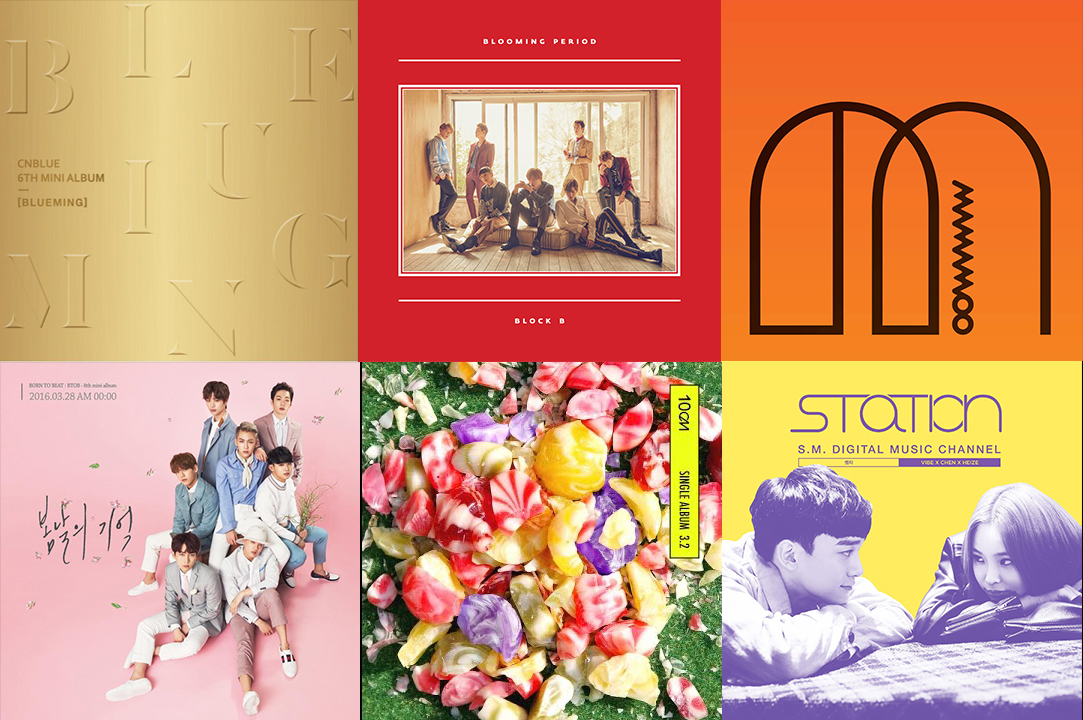 The song won on Inkigayo, M!Countdown, and Show Champion last week. It also had strong showings on all other chart sources. “Toy” easily won over last week’s No. 1 song, 10cm’s “What The Spring??” by almost 200 points. Block B previously reached the #1 on our charts with “HER” in 2014. Congratulations to Block B.

There are three new songs in the top 10 this week. Moving up seven spots to No. 6 is a collaboration between EXO’s Chen, new female rapper Heize, and veteran ballad duo Vibe. This song is the ninth single from the SM Station project, and is the second top 10 hit from this project following Taeyeon’s “Rain.” It is a mid-tempo dance song written and produced by Vibe’s Ryu Jae Hyun. The lyrics are about a man and a woman who wants to know how they feel about each other.

Debuting at No. 8 is A Pink’s Jung Eun Ji. Even though she has had a few solo projects on drama OST’s and duet songs, this is the first time she released a solo mini-album. “Hopefully Sky” is a folk style ballad showcasing her warm vocals. Jung Eun Ji participates in writing this song together with hitmaker Double Sidekick. The lyrics present a moving message about fathers. “Hopefully Sky” was No. 1 on GAON and all internet charts, and has started to accumulate wins on music show as well. It has a great chance to become our next No. 1 song.

Also debuting in the top 10 at No. 9 is Lee Hi’s new song “My Star.” This song is the title track of the second half of her album “Seoulite.” She already hit No. 1 with “Breathe” on the first half of the album. Written by Teddy and Kush, “My Star” is an upbeat R&B song expressing your heart sincerely to your love ones. Lee Hi’s amazing soulful voice at such a young age is a treat to listen to.