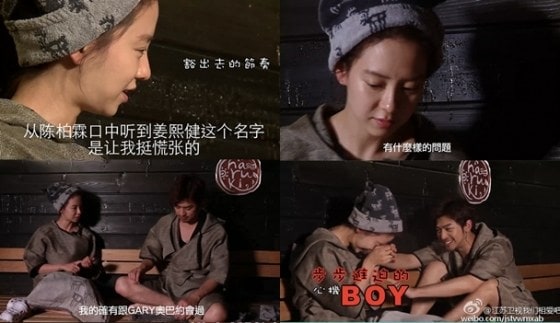 In the latest episode of “We Are in Love,” the Chinese version of “We Got Married,” before leaving for a vacation in Finland, Song Ji Hyo and Chen Bolin have a heart-to-heart discussion.

During their talk, the actor stubbornly asks Song Ji Hyo what kind of relationship she had with Gary, and admitted he felt jealous.

In reply, the actress says that she’d been out with Gary without the other “Running Man” members only once. She said since they’d known each other for such a long time, they were really comfortable with each other, and confirmed that they were good friends.

In a previous interview, Chen Bolin said, “If the opportunity arises, I’d like to meet the ‘Running Man’ members since Ji Hyo is always talking about them.” He continued, “I’ve never met Gary, but he seems like a fun person.”

Currently, Song Ji Hyo and Chen Bolin are becoming increasingly popular in China. They are refreshingly referred to as the “Orange Juice Couple” on China’s “We Are in Love.”