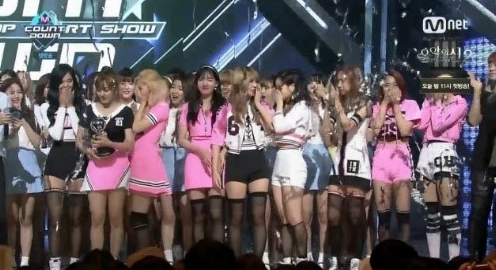 Watch: TWICE Sheds Tears At First Ever Win With “Cheer Up” On “M!Countdown”

The May 5 episode of Mnet’s “M!Countdown featured Jung Eun Ji and TWICE as contenders for first place. TWICE won their very first win since debut with “Cheer Up” after receiving 10,264 points.

TWICE members shed tears overcome with happiness with their win. Jihyo expressed her thanks as she mentioned that the members appeared in the survival reality show “SIXTEEN” around this time last year and are thankful to be able to receive first place after debuting six months ago. Nayeon also took time to say thanks on behalf of the team.

Watch TWICE’s win and performance below!

Also, being the 10th anniversary of Super Junior’s win with “U” on “M!Countdown,” SEVENTEEN performed a special cover of “U.”

Check out more performances below!