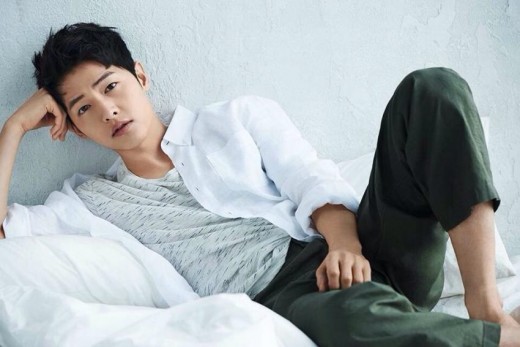 Song Joong Ki’s incredible popularity as a Hallyu star was once again proven at a recent airport visit.

The local channel PBS aired live footage of Song Joong Ki as he entered the airport. Ever since the early morning, fans crowded the airport waiting to see a glance of their favorite star, holding signs that said “Song-Song Couple” and “Song Joong Ki” written in Korean. As soon as they could see his face, the crowds of fans rose up to welcome him. For their safety, the Thai police were dispatched to help keep everyone from harm.

The PBS live shot showed Song Joong Ki waving his hands to his fans until he stepped into his car, showing his deep appreciation for them. He gave them the traditional Thai bow and other fan service to the fans who had waited such a long time to see him.

Following his wildly popular “Descendants of the Sun” drama on KBS, Song Joong Ki has embarked on his “2016 Asia Fan Meeting Tour” with his first stop being Thailand. He will next travel to nine other cities located in China, Hong Kong, and Taiwan.