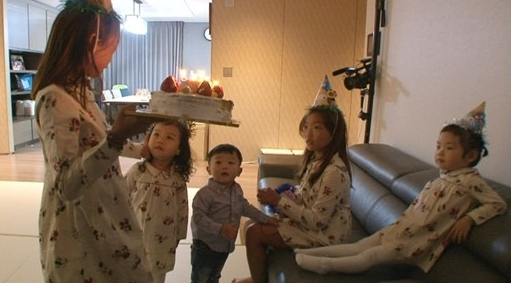 In the preview stills of the upcoming episode of “The Return of Superman,” Jae Si, Jae Ah, Seol Ah, Soo Ah, and Daebak are seen preparing a surprise birthday party for their dad Lee Dong Gook.

During this day, the children decide what they want to get their dad together. Seol Ah and Soo Ah shout, “Banana, strawberries!” revealing only what they want to eat. Later, the two show up carrying a toilet plunger as his present.

The children also make the birthday cake by themselves. Unable to resist the sweetness, Seol Ah, Soo Ah, and Daebak start smearing whip cream all over themselves. In a split second, the whole house is covered with whip cream and it leaves Jae Si and Jae Ah in utter shock.

To see how Lee Dong Gook’s surprise party turns out, watch the next episode of “The Return of Superman” on May 8 at 4:50 p.m. KST.

You can catch up to the latest episode of the show on Viki:

Lee Dong Gook
The Return of Superman
How does this article make you feel?