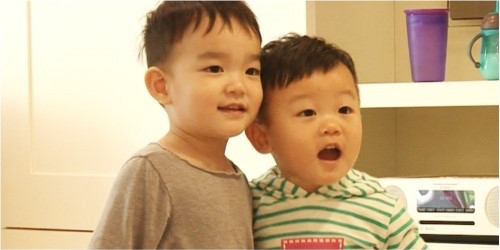 The upcoming May 8 episode of the popular KBS variety show “The Return of Superman” is titled “Daddy Needs Daddy Too.” On this episode, Lee Dong Gook‘s son Daebak goes to visit Lee Beom Soo and the “SoDa” siblings, where he becomes fast friends with Da Eul. It is especially heartwarming to see because both boys do not have any actual brothers.

This broadcast will show them keeping a promise they had previously made, during Sarang’s last filming, to meet up and play together.

Although it is only their second time meeting each other, Da Eul and Daebak aren’t awkward with each other. Even before Daebak arrives, Da Eul makes his mom smile as he prances around the living room while shouting, “Daebak!” Although they are born in the same year, Daebak’s birthday falls nine months after Da Eul’s. So, Da Eul is reliable and takes it upon himself to take care of Daebak. For example, he even shares his toys with Daebak, and gifts him his favorite set of underwear to wear. 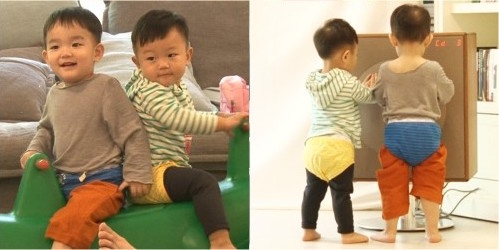 Daebak is just as happy to see Da Eul, although at first he stares at the other child with wide eyes while fidgeting. However, he becomes more comfortable soon after, thanks to Da Eul’s bold displays of affections. Daebak wears his new underwear over his pants and dances together with his new friend Da Eul.

This episode of “The Return of Superman” will air on May 8 on KBS at 4:50 p.m. KST. Meanwhile, you can watch the latest episode on Viki here below!

The Return of Superman
Daebak
Da Eul
How does this article make you feel?