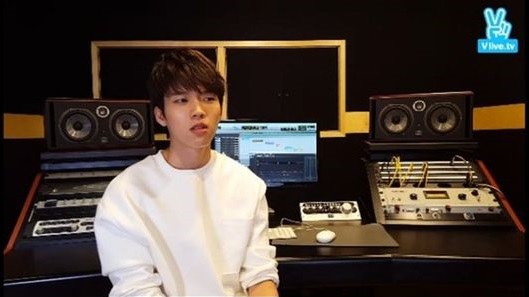 INFINITE’s Woohyun, who will soon make his long-awaited solo debut, is so passionate about music!

On May 7, the idol hosted the “Nam Woohyun’s ‘Write’ Album Preview Show” through V app.

During the live show, Woohyun acknowledges that the fans must have waited a long time, and says, “I have also been preparing for a long time. I had to work slowly and steadily. I actually prepared for two years in order to show my own unique color, one that’s different from when there’s seven of us. I apologize I made you guys wait for so long.”

The singer also gives his fans a sneak peek of all the tracks and reveals more details about the album.

He explains, “All six tracks on the album are love songs, and every song has a different breakup story. I hope you guys will keep that in mind when listening to these songs.” The singer also says that even though they all portray different styles of music, there is a recurring theme in the songs.

After playing a part of title track “Nodding” (working title), Woohyun describes it as a love song which expresses “the misery, emptiness, and loneliness” after a separation. He says, “Real instruments were used when recording. This song was thoroughly made piece by piece. The lyrics really moved me.” The singer also adds, “Jay Yoon and Kim Yi Na wrote the lyrics to this song. It’s really good, isn’t it? The first time I heard it, I fell for it and kept listening for three months.”

His debut solo album, “Write,” will drop on May 9.