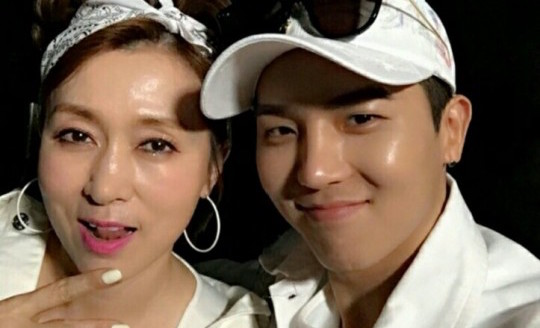 The two stars received lots of love and attention for their catchy song, a diss rap from an angry mom to her pubescent daughter.

In response to popular demand for the song to be released as a digital single, Song Mino asked Yang Hyun Suk directly if YG Entertainment could release the song.

On May 7, Yang Hyun Suk announced that the song would be released on May 9 at 12 p.m., KST. He also uploaded screenshots of his conversation with Song Mino and Moon Hee Kyung onto Instagram.

Song Mino writes, “Moon Hee Kyung asked me to forward this message to you.”

In the forwarded message, Moon Hee Kyung writes, “President Yang Hyun Suk. Hello, I’m actress Moon Hee Kyung. Thank you so much for sending Song Mino to us. I feel like I’ve gotten a son. I think ‘Umma-yah’ is a song that expresses all the joys and sorrows of the mothers in the nation.”

She continues, “It’s a song that relieves a mother’s stress all in one fell swoop~ I earnestly hope that you would make the song into a single. It’s a wish I have before I die ^^ Shouldn’t good songs be heard by lots of people? Please make the right decision. Also, I am your fan, President Yan Hyung Suk ^^.”

Yang Hyun Suk responds to the text wittily, asking Song Mino, “Did you make her [write this]?”

If you haven’t watched the performance, you can see it here.